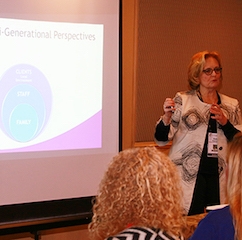 Scottsdale, AZ—The second of two Centurion Show retailer workshops addressing the topic of generational transitions was led by Kate Peterson of Performance Concepts. Titled ‘Both Sides of the Counter: Dealing with Perspectives From Matures to Post-Millennials,’ her focus was key changes brought on by multiple generations in the workplace as both employees and consumers. Both her session and one dedicated to transitioning ownership and/or management of the business were held twice, on Sunday and Monday mornings of the Centurion Scottsdale Show.

Peterson began with this video detailing some key changes in the work world that many jewelers grew up in. Among those key changes—and what it means for jewelers:

Younger workers are very well educated, high-quality employees. There’s a lot of competition for them; how do you stack up as a place to work?

Younger workers will have had 10-14 jobs by the time they’re 38 years old. How do you look at resumes?

There are five generations in the workplace and the marketplace. These all are both employees and consumers, ranging from teens to seniors.

There are three billion Internet users, 1.55 billion Facebook users, and 100 billion Google searches daily. Are you reaching people where they are and offering information and payment options the way consumers want to receive it, or relying on old methods?

Do you check your e-reputation regularly? If you don’t, you must.

There are many layers of dealing with family businesses, said Peterson. Not only are there multiple generations of family, there also are employees to consider.

“I believe family and business are two words that need to be separated. A family member on the staff is a member of your store staff. If a son or daughter starts in the business, they have to earn the respect of people who changed their diapers as babies—and now they’re trying to be the boss. I see many children put into impossible position by parents that didn’t think it through.”

Generational elements also come into play when dealing with clients, she said.

“If you think younger people aren’t buying jewelry, they are—just not necessarily from you. Candy Crush Saga makes $2 million a year in ad revenue. If Facebook were a country, it would be the largest country in the world. How much TV is watched on Netflix and Spotify—and how many ads do you buy on regular TV?” 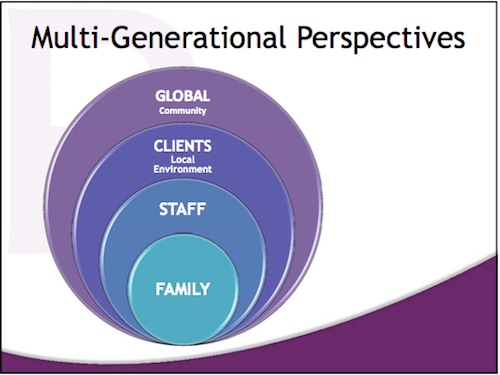 A jeweler has to go where these clients are, she said. For instance, YouTube videos.  A lot of stores are using YouTube and using it very effectively. “If you have designers, get one of your designers on a web conference and talk about who they are and what they do and with their permission put it on YouTube.”

Another radical change is how to attract talented employees. Peterson acknowledged, “It’s a scary thing for those of us in business for a long time because we don’t really understand how it works.” But it’s essential to look at resumes and job history differently: Boomers were taught to build a career within one company; today’s workers change jobs often.

“How many people would toss resumes with more than a couple of jobs and figure they don’t stay anywhere very long? Fact is, if you are one of those folks continuing to hold out and look for that person who only changed jobs once or twice, you’re going to be running the store by yourself, unless you want to hire a Boomer. Next time you see someone whose resume has five jobs, don’t think ‘unstable,’ think, ‘what did they learn in each job? This person has more experience than I do!”

Nor is the online world confined to the young: there’s a huge population of seniors using the Internet, and two billion smartphone users in the world.

“What does that have to do with you? How much attention do you pay to your website? Is it mobile-friendly? More people will pull up a site on their phone than at their desk!” said Peterson. And if you don’t watch your e-reputation regularly or have someone whose job it is to watch it regularly, you are hurting yourself. “The old adage was a happy customer would tell three people and an unhappy customer will tell 10. Now, with one button push, an unhappy customer can tell 10,000.”

“First figure out what you did. You might not have done anything, but think carefully in case you did.” To deal with a negative review, it does no good to respond online beyond saying, “thanks for your opinion, and we want to respond to this quickly so please contact us.”

But the more good reviews you have, the less impact the bad reviews have. She recommended a company called Podium.com, which is a software platform for garnering reviews. “Every client I work with that has used the service has wonderful things to say about them. The number of five-star reviews they’ve gotten since using Podium has escalated five times.”

Older people pay attention to reviews as much as younger ones.  “My 26-year-old won’t go any restaurant without checking a review first, and my 77- year-old father also checks reviews before going out to eat. If you’re a jeweler, you’re probably on TripAdvisor. People check that more than Yelp if they’re traveling.”

You are dealing with five generations of people—both employees and consumers—she said. (As of December 2016, the leading edge of Gen-Z is over age 19.)

These are the five:

Traditionalists are now age 72+. More stable, more risk-averse, and a little different in buying patterns, they’re all about function and value. With values shaped by the Depression, WWII, and the postwar boom years, they tend to be more loyal and direct, and have had fairly balanced lives. They worked hard—some still do—but when they’re home, they turn off from work.

Baby Boomers are age 53-71. The instant gratification and “Me” generation, they were the first to put forth the idea that work was more important than personal pursuits--and business owners are primarily in this age group. “All have the attitude that that’s how it ought to be," says Peterson. "‘You have to pay your dues because we did.’ ‘We were told to jump and we asked how high.’ Today, Millennials are told to jump and they say ‘Really? Do I have to? Is that the only direction to jump in? Are you jumping with me?’

Gen-X is a smaller cohort, now age 36-52. This group places a much higher value on work/life balance than Boomers, leading to its often-unfair reputation as slackers. But this group also is very adaptive as job instability and downsizings become more common.

Millennials, now age 20-35. In size, this group surpassed Boomers last year, but is fed not only by birth rates but also by immigrants, especially high talent in the tech area. They have the most global outlook, but also have some of the collaborative, family, and patriotic values of Traditionalists as well as the can-do attitude of Boomers.

The newest is Gen-Z or “iGen,” age 19 and under. For older members of this group, both 9/11 and the Great Recession occurred during their childhood, greatly shaping their mindset as adults. The resulting sense of insecurity has led to a greater entrepreneurial spirit among this group.

“Why worry about Gen-Z in business?  If you have a family, they probably have one of these coming up. High school seniors have more education than we did coming out of college because there’s so much more information available now,” Peterson pointed out.

It’s more about what matches your image than age. “If your brand is about modern and fashion forward but I walk in and everybody is over 60, there’s a disconnect even if they ‘get it.’ Or if you have a very traditional store and all your employees very young, there’s also a disconnect. You have to have a mix,” she said. 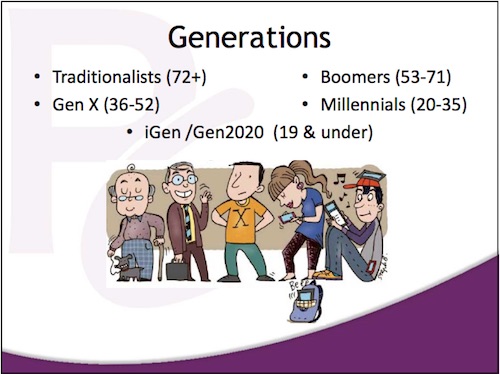 A variety of converging trends are happening: There are 72-year-olds working—usually because they want to, not because they need to—and they’re still consuming luxury, but more targeted in what they buy. Some work because they can’t retire the way they want to. They could retire if they had to, but not the way they’d like. Some Boomers also are helping to support Millennial children.

Whatever the reason, generational differences have to be managed. Not only does each generation shop differently, they pay differently. Are you set up with PayPal, Apple and Android payment, and other cashless transaction apps?

“Traditionalists are all about paying by check. Boomers are all checks or credit cards. Gen-X, credit cards. Millennials, debit cards. And younger Millennials and iGen are cashless: it’s all PayPal and Venmo. I send my son his rent bill via Venmo, he pushes a button and I get paid.” These apps are very easy to set up and download on your phone, says Peterson.

Upper-end Boomers are the wealthiest they have ever been in their lives. Products of Depression thinking, they learned to be conservative as younger consumers, so they have a lot of savings. Many Boomers spent big, but many also were smart investors. Traditionalists are more concerned about their estate or what to leave their kids; Boomers less so. They tend to have a more self-focused mindset and will spend on themselves, says Peterson.

Gen-X and Millennials, meanwhile, are earning at higher levels than their parents did, and for a longer time. First-job income out of college is now higher than ever, largely skewed by high-tech jobs. But Peterson warns that means if you want to hire bright, talented people, you must be reasonably competitive, even if the job is different.

She explained each generation’s mindset about career expectations, and also which technology defined their lives most:

Finally, she outlined how each group communicates: Traditionalists prefer hand-written letters. Boomers pick up a phone and call, Gen-X sends an email or texts, Millennials are on social media, and the iGen will ping your wearable.

“I’m walking by Williams Sonoma, I’ve shopped there before, so if I’m walking by, it’s very likely I will get a text to my smartwatch that says ‘come in!’”

Primary purchase drivers for Traditionalists is simplicity and convenience. For Boomers, it’s all about function. Gen-X is all about research and comparison, while for Millennials it’s about self-expression. And Gen-Z is proving to have a real pack mentality: if one buys, they all buy.

“People ask, ‘don’t Millennials all want the same thing?’ The answer is yes and no. They want customized, not necessarily custom-made,” says Peterson.

She blew another long-standing mindset to pieces:

“Most of us in our industry were raised with the thought that bridal is first big purchase couples make. That’s no longer true! The average age of couples at first marriage is now between 27 and 29, and in certain areas of the country it’s even older. I don’t know any 28-year-old bride that will say ‘yes’ if he hasn’t bought her a [jewelry] birthday present, so now it is about fashion!! It’s not like it used to be where they buy the engagement ring and you own them forever after. Now it’s those $200 and $300 birthday presents that build loyalty to sell them the engagement ring.”

Traditionalists very value focused. Boomers are optimistic and idealistic as consumers and they want things that feed their aspirations of how they want to live.

Gen X is cynical and skeptical: they behave like the quintessential middle child, said Peterson. Millennials are informed and demanding, and iGen—not unlike their Boomer grandparents—wants instant gratification. That, she says, is great news for brick-and-mortar retailers.