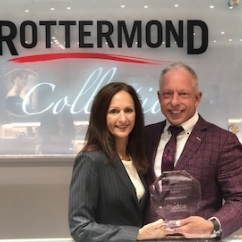 Omaha, NE—The Edge Retail Academy (ERA) has presented Cindi and Dean Rottermond (left) of Rottermond Jewelers with the second annual William (Wag) Wagner Business Excellence Award, given annually by ERA to jewelers that have achieved the most exceptional business growth in the past 12 months. In addition to the award, the Rottermonds also received a check for $1000.

“The Award has two goals: (1) to acknowledge business excellence from independent retailers and (2) to honor the memory of long serving ERA Business Advisor William (Wag) Wagner, whose service, loyalty and advice went well beyond the expectations of our clients, his work colleagues and our company,” said David Brown, ERA president. “We honor Wag's enormous integrity, sense of fair play and friendship.” Wagner passed away in September 2018.

Based in Milford, MI, Rottermond Jewelers was founded in 1984 and has two stores. It is renowned for its unparalleled inventory, top-notch customer care, and expert custom jewelry design.

Says Brown, “Cindi and Dean are very focused on diligently reviewing business metrics and applying best practices to make meaningful improvements to their store’s financial health. In 2019, this focus paid off; Rottermond posted a double digit increase in sales and a 20%+ increase in profits. The jeweler also reduced its aged inventory by 20%.”

Cindi Rottermond added, “Wag was an important early advisor as well as close friend to us. We are very touched to be honored with an award honoring business excellence that is named for one of our most trusted advisors.”

This is the second year for the award; the inaugural winner in 2019 was Roman Jewelers in Bridgewater, NJ.

Los Angeles, CA – Contemporary bridal and fashion jewelry brand Uneek has named John Rowlett (below) as its new regional vice president of sales for the Southeast. 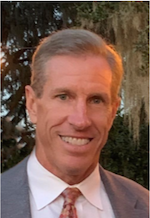 A 34-year veteran of the jewelry industry, Rowlett spent 30 years with renowned manufacturer Gottlieb & Sons. In that time, Rowlett successfully grew every territory he managed, taking time to work on both the wholesale and retail sides to further understand the industry and build relationships with the retailers and develop a reputation as one of the top sales representatives in the industry.

Cortland Shopper, Uneek vice president of sales, said, “We feel so lucky and excited to have John on our team. His customers absolutely love him and he is already inspiring me with his passion, thoroughness, and follow through. He definitely encompasses Uneek’s desire to go above and beyond for our retail partners.”

Rowlett added, “I’ve spent months researching the industry, where it’s going, and the best possible opportunities going forward. It is such an honor to have landed on the best star of the future, Uneek Jewelry.”

Omaha, NE—Erin Limas, chief financial officer for Borsheims, has been awarded the jeweler’s prestigious Ike It Award. Limas has played a key role in Borsheims development over the past three decades and was named the recipient at the company’s holiday party after being nominated and selected by her coworkers. 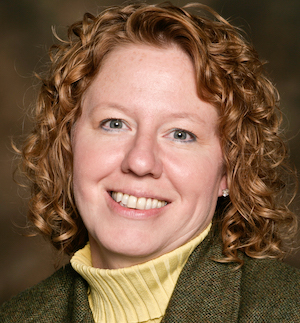 Limas started at Borsheims in 1987 as an accountant, and earned various accounting management promotions through the years. She has been the project leader on many of the company’s biggest growth projects. She implemented the store’s first retail management system used to track and sell inventory, managed lease negotiations and large-scale remodel projects, launched the first website and, this year, led the way on selecting and implementing a new software system for the organization.

She was named chief financial officer in 1996, and is known for her intensity, enthusiasm, insight, and humor, and for being always willing to pitch in wherever she is needed.

Borsheims’ president and CEO Karen Goracke says Limas has played a critical role at Borsheims over the past 32 years. “Erin’s undying passion, dedication, and loyalty to Borsheims combined with her knowledge and business acumen have helped to guide us. Erin is always looking to the future and makes sure the rest of us are, too. She exemplifies everything the Ike It Award stands for.”

The Ike It Award was started at Borsheims in 1992, just a year after Ike Friedman’s death. The award is a tribute to Ike’s legacy, honoring someone who demonstrates exceptional customer service, a willingness to help, and an enthusiasm for Borsheims. For more on Ike’s importance to Borsheims, click here for a short video.