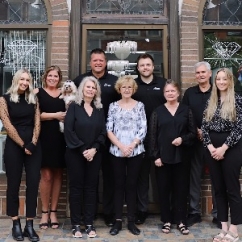 Winona, MN--The original Morgan's Jewelers was started back in 1862 by S.W Morgan when Abraham Lincoln was president. 160 years later, the store is still going strong.

When S.W Morgan settled in Winona, he conversed with J B Stockton, who founded Stockton Minn. On May 1st, 1862, he started what would become a legacy by selling his first key watch for five cents. The first day of sales for the store stood at $1.55 million dollars, which according to a news report, is valued today at roughly $45.

"One interesting thing is when Morgan's opened his business, one of his big sales was eyeglasses," Winona County Historical Society archivist Walter Bennick said in the report. "They were probably bigger sellers than jewelry at the time."

It wasn't all a walk in the park for S.W Morgan as the jewelry store suffered a loss after two months after its opening. "It was a short-lived experience. There was a fire in the middle of summer in 1862, which destroyed the building," Bennick said in the report. "According to information gleamed out of newspapers he was able to salvage a good share of his records and his stock but lost the building."

The business moved twice — first to Morgan Block and then to 3rd Street, its present location.

"Being in business for 160 years - that's a pretty big accomplishment," Gamoke said in the report. "Customers and family members bring things that have been in their family for over 100 years and they trust us to repair it, rebuild it, maybe duplicate it. We're a small local business and we thrive on the Winona community and the surrounding areas."

Interested in learning more about the store? Read the entire report.

Next article:
Smash-and-Grab Robbers Get Away With Items Worth $80,000