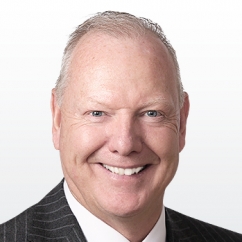 Saskatoon, SK—Unfortunately, there is a reason why high-end jewelry stores get a bad rap for snobbery. For every jeweler that makes a huge sale to a grimy customer in overalls, there’s unfortunately another that doesn’t bother giving that customer the time of day.

Such was the experience of Russ Howard (image), a two-time world champion who won Olympic gold for curling and now is a major commentator for the sport on Canadian sports network TSN. He related his jewelry-store snub—with humor—in a recent article in the Saskatoon StarPhoenix.

Shortly after returning home from the Winter Games in Turin (Torino), Italy, in 2006, Howard and his medal were in demand everywhere: banquets, award ceremonies, hockey games, you name it. Not surprisingly, everyone wanted to touch the medal, and was getting a bit grimy, so he wanted to protect it.

“I went with my daughter one day, picked her up from school. I’ve got my old coat on because I was shovelling the driveway. I kind of looked behaggled.

I said, ‘Let’s drop into the jewelry store and see if they have some kind of spray or solution to protect the medal.’ I went into this high end — very high end — store, way too high end. They looked me up and down. I couldn’t get service. After about 15, 20 minutes patiently waiting around for somebody to even give me the time of day, I said, ‘I just wondered if there is any protection or spray or coating for gold.’ The lady said, ‘No.’

Another guy comes across and he recognizes me, and says, ‘Can I help you, Mr. Howard?’ The same girl says, ‘You can’t put anything on gold. What are you trying to protect, anyways?’ OK. So, I popped out the gold medal. She just about fell over.”

Howard has been a mainstay at TSN since 2008 and today is one of a team of three curling commentators on the network, along with Vic Rauter and Cheryl Bernard. The trio most recently were on-air at the Canadian Olympic Curling Trials in Saskatoon.