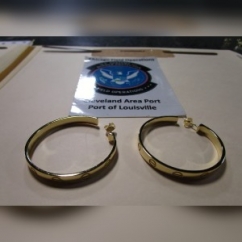 The items, if real, would have been worth $2.51 million in retail price.

A release by the police department stated that the shipment arrived from Hong Kong on October 26 and was headed to a New York-based corporation.

Authorities found the following items in the package upon inspection:

“CBP is responsible for enforcing nearly 500 U.S. trade laws and regulations on behalf of 49 other federal agencies. CBP officers play a critical role in the nation’s efforts to protect the American consumer, the U.S economy, and U.S. jobs,” LaFonda D. Sutton-Burke, Director of Field Operations-Chicago Field Office, said in the news release. “This is another dramatic example of how dedicated CBP officers are to the CBP mission.”

The release noted that consumers in the U.S. spend more than $100 billion annually on goods that infringe on intellectual property rights (IPR).

Learn more in the release.