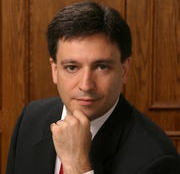 Detroit, MI--A celebrity jeweler famous for auctioning the engagement ring President Donald Trump gave to ex-wife Marla Maples is expected to plead guilty to orchestrating a $12 million diamond caper after prosecutors filed a new wire fraud charge this past Tuesday. DuMouchelle is shown above/left. [This article was published on June 16 by The Detroit News, where the full article can be reviewed.]

A plea would resolve a criminal case against Joseph DuMouchelle, 58, owner of DuMouchelle Fine & Estate Jewelers in Birmingham, that involves millionaires, phony documents, blue bloods and "The Yellow Rose," a rare 77-carat diamond.

DuMouchelle, a scion of the influential family that founded DuMouchelle Art Galleries in Detroit, was first charged with a crime in November. On Tuesday, prosecutors filed a criminal information against the jeweler charging him with wire fraud. A criminal information is a type of filing that means a guilty plea is expected.

The fraud charge is punishable by up to 20 years in federal prison. His lawyer, Jonathan Epstein, could not be immediately reached Tuesday for comment.

The Yellow Rose diamond is portrayed in a federal criminal complaint as a means for DuMouchelle to escape mounting financial problems, including money owed to a North Dakota businessman.