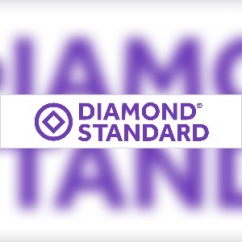 New York, NY--Diamond Standard Co., developer of the world's only regulator-approved diamond commodities, announced in a press release the closing of a $30 million investment round co-led by Left Lane Capital and Horizon Kinetics. Additional participants in the round, designed to expand production capacity and accelerate the distribution of the world's only regulator- approved diamond commodities, include Gaingels and Republic.co.

The raise comes on the heels of the launch of the Diamond Standard Fund, enabling investors to allocate to a new asset class – diamonds – through convenient shares rather than holding physical diamonds directly. In September 2021, the firm announced a new headquarters on Fifth Avenue, overlooking the New York diamond district and conveniently located near the Gemological Institute of America (GIA). Last year it also announced agreements to develop diamond futures offered by MGEX via the CME Globex platform and options via MIAX.

By positioning diamonds as a market-traded commodity, Diamond Standard unlocks a natural resource currently worth $1.2 trillion – more than all the world's silver and platinum combined. With the recent launch of the Diamond Standard Bar and Diamond Standard Fund, additional production capacity is needed to meet rapidly growing investor demand. The firm is aggressively hiring and building a new Bar assembly facility in collaboration with the International Gemological Institute. The firm's diamonds are graded by the GIA and International Gemological Institute, and company operations are internally audited by Deloitte.

"Following 20% returns last year, the Diamond Standard Coin has continued to generate a positive return this year, while the S&P 500 is down 14% and bitcoin is down 50%," said Cormac Kinney, Founder and CEO of Diamond Standard, in the press release. "Investors need a new uncorrelated asset class, and this capital will enable us to increase capacity and expand our offerings,"

Left Lane Capital has made investments in some of the most promising internet and consumer technology companies in four continents. The firm targets businesses at key growth inflection points and leads deals at the Series A to C stage.

More details are in this news release.

Previous article:
Here’s What One of the Largest Gem-Quality Diamonds Looks Like