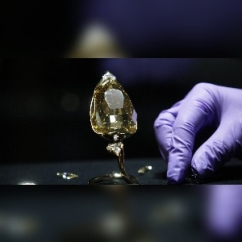 One of the largest gem-quality diamonds in the world, the L'Incomparable was cut from an 890-carat diamond crystal found in the Democratic Republic of Congo.

Per the post, the necklace in which the diamond is set in contains 637 carats of diamonds in total weight and carries an estimated value of $55 million — recorded by the Guinness World Records as the most valuable necklace in the world since 2013.

Before being set in the necklace, the diamond had been exhibited in museums, including the Smithsonian Institution in Washington DC, notes a report, adding that the "magnificent diamond" was found by chance by a young girl in a discarded mining rubble pile.