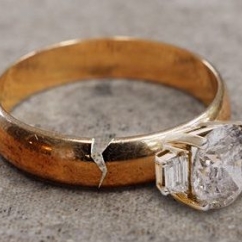 But tradition isn’t law, so when things get messy the dispute usually ends up in court. As one lawyer observed, the bigger the ring, the bigger the mess. Such was the case of an Alabama couple, where the bride-to-be broke off the engagement and told her ex-fiancé she threw his $32,000 ring into the Intercoastal Waterway.

But in reality, she had pawned the ring for $10,000, says this report. Her ex sued, but an Alabama county court ruled in favor of the woman, saying the ring had been a Christmas gift with no strings attached.

Not surprisingly, he appealed to state court. The Alabama Court of Appeals overturned the verdict, ruling that the ring was given on the condition of a marriage that didn't happen. It also slapped the woman for lying, ruling that she was “unjustly enriched” at her former fiancé’s expense. She was ordered to repay him the full cost of the ring.

The legalities of engagement ring ownership vary widely, both by state and by situation. In states that have a conditional gift law or a “no fault” law, the ring must be returned regardless of who ended the engagement or why. In states with an implied conditional gift law, traditional etiquette is upheld: the bride returns the ring if she broke the engagement but keeps it if the groom broke it. He can ask for it back but she’s not obligated to return it. Some states default to “fault” laws and rule on a case-by-case basis resting on why the engagement was ended.

And in states with an unconditional gift law, the groom is out of luck, period, unless the bride is feeling magnanimous.

Then there are the exceptions: the bride who gave her groom money and labor to build a business only to be dumped before the wedding might be entitled to keep the ring as compensation regardless of state precedent. A groom who presented a family heirloom engagement ring might be able to recover it even if he broke the engagement.

After marriage, however, everything changes. The condition has been met and the ring belongs to the recipient. According to Shiner Law Group, a business law firm in Florida, the ring even likely would be excluded from the property settlement process during divorce.