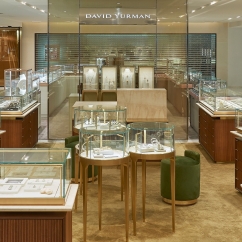 Paris, France--David Yurman has opened its first flagship store in Paris. The store is located at 245 rue Saint-Honoré in Paris.

As per a report, the new outlet expresses the brand's evolution under its newly appointed president Evan Yurman. During his time with the brand, Yurman has guided the development of its men's jewelry business, which now represents a quarter of the total sales. He also serves as the brand's chief creative officer.

“Paris is a place of inspiration. It’s where creative dialogues take place in poetry, art, and culture,” Yurman said in the news report. “We are honored to bring our American sensibility of openness and inclusion to Paris, where luxury is more about exclusivity. We embody a consumer-centered philosophy which is what we’ve built the business one.”

Yurman is seeking accelerated growth for the brand over the next three years. "We’re at a jumping-off point for the business, having an extremely strong foundation and brand recognition in the U.S. market," he said in the report. "And we see a lot of room to grow in the global market to reach our potential."