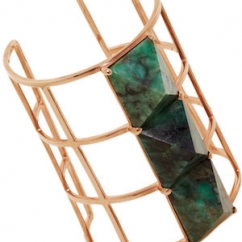 New York, NY—One minute they want a $10,000 engagement ring, the next you can’t sell them a $300 bracelet. If there’s any customer sure to frustrate a luxury jeweler, it’s a Millennial. 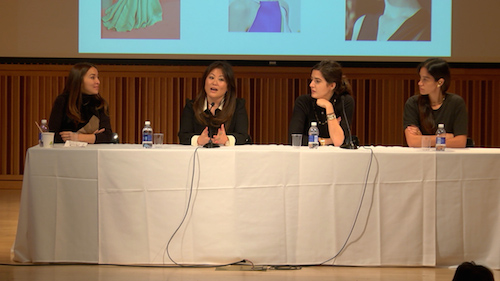 Success with Millennials includes understanding a few key differences for that generation:

1. Above all else, this generation emphasizes individuality and personalization. Jewelry, even if it isn’t custom designed, must speak to who the customer is and make the customer feel as if it’s a reflection of her own self and personality.

2. Millennials are a more casual generation than their forebears. Many—especially in ciites like Los Angeles—wear jeans for just about any occasion, so the way they show individuality is through accessories. Bags, shoes, and jewelry have been elevated in status as a result. 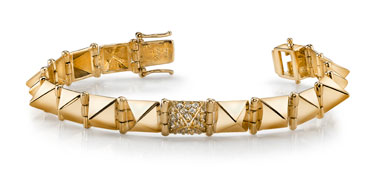 Anita Ko's gold and diamond spike bracelet is an example of using precious materials in a less-precious way. Accessories define individual style, she says, especially in Los Angeles where jeans and t-shirts are an everyday uniform.

3. Because of technology, Millennials have a different way of communicating than previous generations. As a result, designers like Alison Lou Chemla, who uses emoticons as a jewelry theme, really speak to a Millennial audience.

4. Varied price points. “We’ve seen an evolution in jewelry in my time at W,” Mata told the audience. Precious stones are not used as preciously as in the past, she said, which fits in with the Millennials’ habit of high/low dressing.

“Everything in my collection is designed with higher and lower price points,” Chemla said. “My ice cream pop collection is youthful but a woman in her fifties can throw it on with her diamonds-by-the-yard.”

5. Trends for Millennials also are as likely to filter up as down. For example, the ear cuff was something that seemed too weird for words 10 years ago; now mainstream jewelers are selling them. “We don’t want to just be sparkling all over town. We want to live our lives and be able to go anywhere in it,” says Ana Khouri.

“For years, earring designs weighed customers down. Now it’s about lifting them up,” said Anita Ko. Chandelier earrings are over, she said—only to be corrected by Mata. “They’re dormant. They’re not over!” But, she acknowledged, older clients sometimes have to have their earlobes repaired after years of wearing heavy earrings.

6. Millennials also want to know who they’re doing business with. “It’s all about you, emphasized Khouri. “They want to connect with you as a person, not you as a showcase.”

7. Millennials care deeply about how a company does business; that it’s ethical and responsible. “They may not specifically ask, but we automatically [practice sustainability] as a company so they don’t have to ask,” says Khouri. “We pay a bit more for our gold and our stones and we also give a lot to our employees so they can grow.” Chemla’s line, meanwhile, is made entirely in New York, a fact that she promotes heavily, along with responsible sourcing of stones.

8. Use the right social media for the right place. All three designers favor Instagram as their social media of choice, but Claudia Mata warned that while Instagram is the be-all for New York-based people, Facebook still reigns everywhere else. Social media also is where consumers really want to get to know the designer. While some designers are hesitant to put too much personal information online, Ana Khouri says people really do want to know your story beyond your jewelry. Anita Ko added that it has been a boon to have such a wide reach for so little money by using social media.

“It’s an organic process. You don’t have to throw $10 million at it and hope it goes well,” she said.

Talk then turned to celebrity endorsements, a big deal in the Millennial world. At least, in the United States, says Ana Khouri. In Europe, it’s less of an influence than it is here.

“It has to be a symbiotic relationship. The celebrity has to feel great about wearing your jewelry, because that translates itself in a photo. That’s why you don’t just want a ‘borrow,’ you want someone who is wearing your product because they want to, who is your customer, who will promote it because they love it,” said Mata. “And they have to have a social media following.”

It’s also a business. In the past, even celebrities would wear certain jewelry on the red carpet because they were a client of the house or their husband was a client of the house, but today agents and stylists actually negotiate who wears what like a part in a film. “When you see [big brands like] Chopard or Dior on the red carpet, more than likely the celebrity has a contract with them to wear it,” says Anita Ko.

But even a smaller designer needs to play the game. “PR is very important,” says Ko bluntly. If you don’t have the right press, the right magazines, the right blogs, and the right celebrity, you aren’t in the game.”