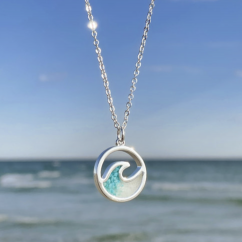 Kicking off March 1, Dune will donate 15% of net proceeds to support the selected charities, plus they will feature a gift with online purchase, according to a company release, which also noted that Dune Jewelry is an "experiential jewelry company famous for using sand and earth elements from thousands of memorable and iconic locations worldwide,"

"We've had such great success with our Giving Week events and are continuing them with wonderfully deserving organizations during the entire month of March this year," said Holly Daniels Christensen, the company's Founder and CEO. "Our world is very much in need of positivity, so not only will we be donating 15% of net proceeds, but we will also be highlighting each charity to bring awareness to their mission."

Dune's social media will be used to make announcements about any updates throughout the month.

In the week between March 14 and March 20, Camille Kostek's new Blue Ice Necklace will be launched with 15% of its net proceeds donated to Mission Blue, Sylvia Earle's organization that works tirelessly to protect our oceans, said the release.

The month of initiatives will wrap up in the final week, March 28 through March 31, with a "surprise finale" announced via social media.

Previous article:
Rebecca Foerster Resigns from Diamonds Do Good Board

Next article:
Roseville Galleria Robbery: Police in Search of 10 suspects