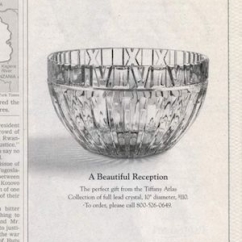 New York, NY—In one of the first signs of how life might change under LVMH, Tiffany & Co. has pulled its print ad from the upper right corner of page A3 in the New York Times—a spot it has occupied since 1896.

Yes, that’s 1896, not a typographical error for 1986 or 1996. For 125 years, the ad on the first inside-right page was a constant that readers would see after opening the front page of the paper. It’s been there through good times and bad, sometimes next to uplifting stories, sometimes wryly relevant (as RoughlyDaily points out about a Tiffany engagement ring ad next to an article about mail-order brides from Russia), and sometimes unfortunately juxtaposed next to a deeply tragic story. 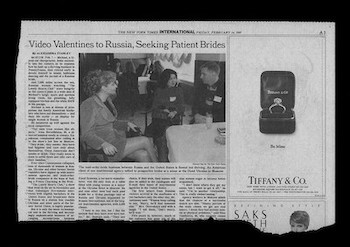 Intentional or not? RoughlyDaily shows this Tiffany' ad of an engagement ring juxtaposed next to an article about mail-order brides from Russia.

But will readers notice it’s gone?

Like anyone who lives on the approach to an airport or near a rail line will attest, you get used to the planes and trains and you don’t notice them going by until one day they don’t. Then, the silence is deafening.

In that regard, consumers may be as accustomed to seeing the ad in the upper right corner of page A3 as they are the paper’s famous tagline “All The News That’s Fit To Print” under its banner, even if it doesn’t consciously register. As Quentin Hardy, a former NY Times editor now head of editorial for Google Cloud, tweeted, “it’s like a disturbance in The Force.”

The ads were remarkably consistent, not just in their daily presence but also in their appearance: a single product with the relevant text above or below and the Tiffany logo and contact information at the bottom. Always tasteful, but also ever so occasionally, political. Tiffany—no stranger to taking firm stands on environmental issues—in 2017 used its ad to urge former president Donald Trump to keep the United States in the Paris Climate Agreement.

According to reports, Tiffany plans to maintain a similar ad spend with the Times but will divert more of it to online. Alexandre Arnault, the son of LVMH CEO Bernard Arnault, is the jeweler’s new executive vice president of product and communications. The 28-year-old is digitally focused, sharpening the company's already-robust social media presence and believed to be moving away from a corporate to a more personal tone.