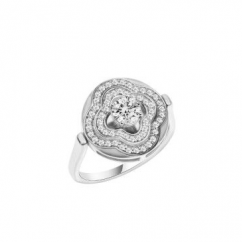 Las Vegas, NV—Even as a panel of experts convened here to discuss five key forces impacting the jewelry market—of which manmade diamonds topped the list—four substantial-size undisclosed synthetic diamonds were discovered in a parcel of 20 stones submitted to a grading lab in Israel.

A panel titled “Five Forces That Are Changing Our Industry” was part of the JCK Show conference program on Saturday, May 31. Led by moderator Ben Janowski of Janos Consultants, the panel featured Abe Sherman of BIG, Russell Shor of GIA, Lita Asscher of diamond company Royal Asscher, and Brandee Dallow of Rio Tinto. The discussion, derived from the top 10 trends Janowski identified on his blog earlier this year, focused heavily on man-made diamonds, changing retail channels, and the perspective of Millennial consumers.

Literally three days later, Rapaport reported that EGL International discovered four synthetic diamonds ranging in size from 0.90 ct. to 1.71 cts. in a parcel of 20 stones submitted for grading by what the lab calls “one of its established customers.” The synthetics were undisclosed.

EGL Group CEO Guy D. Benhamou called this incident particularly worrisome because of the diamonds’ size and quality. Previous discoveries of undisclosed synthetics mixed into parcels of natural stones were all centered on melee—a concern in itself—but this latest find of large J-K color, VVS to VS clarity stones proves that bigger, better man-made diamonds are not only possible but also probably not far from becoming a commercial reality.

A report coming out of India suggests fewer synthetics in the pipeline than the industry fears. The new Natural Diamond Monitoring Committee says the current production of manmade diamonds stands at less than 350,000 carats, compared with more than 125 million carats of gem-quality natural rough, and advanced methods of detection available. Still, transparency and disclosure are key to ensuring a healthy diamond ecosystem.

“They’re [synthetics] not going away. The trade is going to have to learn to live with them,” said GIA senior industry analyst Russell Shor. Watch an exclusive Centurion video interview with Shor about the subject here.

Indeed, Lita Asscher, scion of the company that invented the Asscher cut and whose roots in the industry date back to 1854—13 years prior to the discovery of diamonds in South Africa—spearheaded her company’s foray into synthetics. Royal Asscher’s Rebel Chique collection of synthetic diamond jewelry is centered on the idea that luxury diamond jewelry can be an accessory that changes with the seasons like any other luxury fashion purchase. And high-end designer Reena Ahluwalia, who has won both the coveted De Beers Diamonds International Award and the Rio Tinto Diamonds Global Design Competition for her luxe diamond jewelry, just introduced “Nurture By Reena,” a line of designer jewelry featuring synthetic white and colored diamonds. The line bowed at the JCK Show. 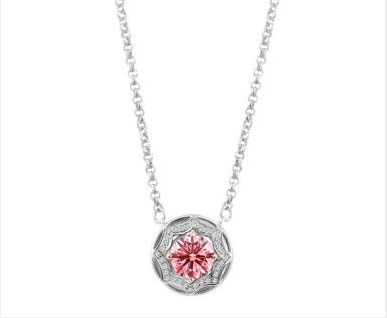 Although recent investments by De Beers, Rio Tinto, and other mining companies assures a supply of natural stones will continue well into mid-century, eventually there will be a shortfall of naturals. Janowski even sees some of that starting as early as three or four years from now.

“Synthetics can be an important source of supply if they’re disclosed,” said Shor, emphasizing disclosure as the key. “If diamond prices keep rising, you’ll see market opportunity for better qualities [of synthetics] but if [consumers] can’t tell the difference between synthetic and natural, prices will fall to the level of doubt because they’re not going to pay the price for natural if they can’t tell the difference.” 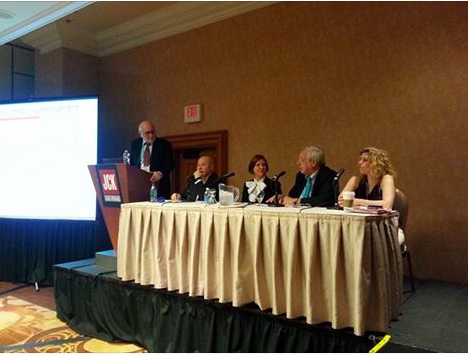 Other questions that arose during the discussion centered on changing distribution channels for jewelry and a shifting mindset between Boomers and Millennial consumers.

With mall expansion down and consolidation of both major and independent jewelry retailers up, fewer hands hold more power, said Janowski. At the same time, the number of jewelry suppliers has grown. That, he says, makes the Internet a very viable channel for jewelry distribution, because if the number of suppliers outstrips the number of retail customers, they’re going to find another place to sell their goods, and that’s the Internet.

Abe Sherman likened the reaction of some retailers to the proverbial deer in the headlights, freezing in place while Dallow pointed out that omni-channel merchandise requires all retailers to be much more savvy.

Shor used the example of Amazon.com, which began as a book retailer and essentially wiped out both scores of independent booksellers and behemoth chain Borders. Rival chain Barnes & Noble, meanwhile, has survived because, in Shor’s words, “when you walk in, you feel scholarly. Our industry stinks at that. We don’t create a ‘have to have it’ desire.”

The Boomer generation grew up in an era of rapid retail expansion and consumerism. The introduction of both suburban lifestyle and credit cards meant instant gratification, not waiting like their Depression-era parents did. But Millennials, on the other hand, have been force-fed the value of financial security, whether through the recession, or their own college debt. They also grew up with political gridlock, developed more “green” values than their parents, and have so much noise and misinformation bombarding them online daily.

“$2,000 means a lot more to them [than their parents] and corporate responsibility is major with them,” says Shor.

“They are not afraid to research and question what to do and how to do it,” said Janowski. “You have to tell a good story. They want to hear the story. They are the first generation that’s sharp enough to know the difference between a real brand and a label.”