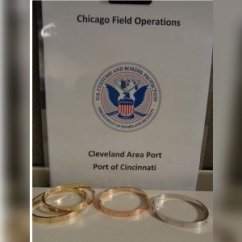 Per a press release, one shipment alone would have been worth over $8 million had the bracelets been genuine.

The release notes that a total of 700 bracelets were seized. Officers suspected these bracelets to be counterfeit based on their origin and appearance. The bracelets lacked fine details, were constructed from cheap material and contained fake inlayed diamonds. This shipment originated in Hong Kong en route to a business in Illinois. These high-end bracelets would have had the Manufacturer’s Suggested Retail Price of $8.82 million had the items been authentic.

“While online shopping has increased, CBP stays vigilant by stopping illegal shipments like these from damaging our economy,” said LaFonda D. Sutton-Burke, Director, Field Operations-Chicago Field Office, in the press release. “Officers at the Port of Cincinnati are always on the lookout to uphold our mission of protecting the American borders from dangerous people and materials.”

CBP laid out the following advice to customers to protect themself and their families from counterfeit items:

Read more in the entire release.

Previous article:
This Female Russian Spy Posed As A Jewelry Designer For 10 Years

Next article:
Patek Philippe Is Now a Stakeholder In Geneva-based Gem-setting Firm Salanitro