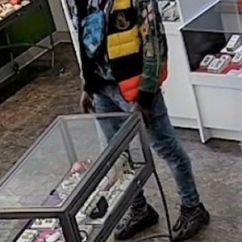 The grab-and-run suspect whom the Jewelers Security Alliance says hit jewelers in Marlton, Hainesport, and Haddon Heights, NJ in November, then again in Oxford, PA and Blackwood, NJ on December 31, appears to be the same one who committed a grab-and-run from Veleska Jewelry in East Hempfield Township, Lancaster County, PA on Saturday, January 16.

An article on Pennlive.com says the thief grabbed a tray of five white gold women’s rings, ran from the store, and drove away in a black sedan with tinted windows.

The thief, described by JSA as a slender black man wearing a light blue fanny pack across his chest, was shown in two surveillance videos from November with the blue pack over a white hoodie, and in the Oxford/Blackwood incidents with it under a multicolored vest. He’s also shown in the vest in the latest incident reported on Pennlive. East Hempfield police described the thief a little taller—about 5’10”—than JSA’s crime bulletins, which put him at about 5’5”. But otherwise the descriptions are very similar: a slim build and mid- to late-20s.

Next article:
National Jeweler ‘My Next Question’ Webinar Features Smith, Smith and Golan