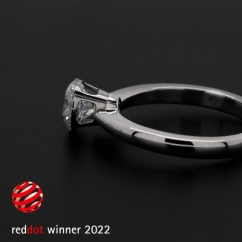 The Floeting Diamond was launched globally in 2021 by VG Jewelers as a breakthrough innovation in solitaire diamond setting. The press release notes that the Floeting design eliminates traditional claws, clasps and prongs which usually hold diamonds in their setting. Prongs impede the light return and sparkle of the diamond and obstruct a clear view of the beauty of the gemstone.

One of the biggest design competitions in the world, the Red Dot Awards attract over 18,000 design professionals, companies, and organizations from more than 60 countries each year. The 2022 Red Dot jury comprised 50 international designers, design professors and journalists from 23 countries.

In their evaluation, the Red Dot judges said, "Less is more – this formula fully applies to the jewelry series The Floeting Diamond." Floeting was awarded for its launch collection of diamond studs, pendant necklace, and solitaire ring. Praised for its minimalist perfection, the Red Dot jury wrote that the setting realized "Antoine de Saint-Exupéry's dictum about perfection being achieved when there is nothing left to take away."

Red Dot Product Design awards are presented according to aesthetics, quality, durability, functionality, and symbolic and emotional content. Also awarded in 2022 for product design were the KiaEV6 which has also won the 2022 European Car of the Year award, and for products from leading brands design including Sony, LG, Epson, Knoll, Kartel, Peugeot, and Honda.

More details are in this press release.