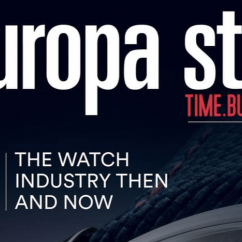 Alongside the usual product highlights, the issue looks at what the watchmaking landscape was like when the publishing house was founded in 1927.

The magazine's publisher and Editor-in-Chief, Serge Maillard, writes in the editorial that digitally archiving the magazine was made possible with a new foundation called The Watch Library. The foundation includes partners such as the International Watch Museum, the Horological Society of New York, Arc Horloger, and others.

The foundation has also been granted charitable status by the Swiss Confederation, allowing it to be a tool of knowledge for future generations.

"Just imagine: a new, horological Library of Alexandria, accessible at the click of a button to journalists, collectors, designers, historians, and enthusiasts," writes Maillard.

Maillard adds, "Just as we are passionately searching for traces of the past, like archaeologists, our children will remember us by the traces we leave on this Earth. And since we will all end up in the archives anyway, we might as well take proper care of this precious heritage and make sure it's not left to rot in the back of a cellar!"

Next article:
Caught on Video: Jewelry Worth $131,000 Looted in Bronx Smash-and-Grab Robbery