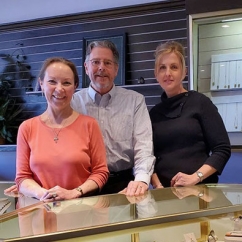 “Since 1913, you have honored Friedrich Jewelers by including us in your celebrations of life and love. Over the last 108 years, our customers have appreciated our commitment to exceptional quality, dependability, value, and services passed down through four generations,” said the couple. “These are the driving forces behind our business, and we believe they show through in all we do. Although bittersweet, the time has come for us to bring this journey to an end. We welcome our new adventure, retirement.”

Like many of their retiring peers, the Friedrichs are preparing to exit the business on a high note. The store has a robust business and while the pandemic shutdowns initially presented a challenge last year, like most better jewelers it experienced a healthy rebound and ended the year up.

The business began in 1913 when Gustav Friedrich opened a jewelry store and began practicing his trade as a watchmaker in a small shop at 21 Ward Street in Rockville, CT. His son, Herbert, took over the business in 1936 and, with his wife, Ursula, raised their twin sons, Robert and Herbert, Jr., and daughter Dorothy in the apartment above the Ward Street store. When both sons expressed interest in the jewelry business, Herbert purchased the former Ronalter Jewelry Store on Main Street in Stafford Springs, CT, in 1947. Robert took over the Stafford store in 1950 and moved it to nearby Stafford Springs in 1968. It continued under the leadership of his daughter, Brenda, and also recently closed.

Herbert Jr., meanwhile, acquired the Ward Street store in 1957, and his son Douglas, a bench jeweler and designer, began working with him in 1978. 11 years later, he and his wife, Jacki, purchased the Ward Street store, and in August 1993 moved it to its current location in the Vernon Commons shopping center. Jacki earned a G.G. from the Gemological Institute of America in 2006 and, in 2008, Friedrich Jewelers became a member of the American Gem Society. The two work closely with their only staff member, Becky Penta, a designer in her own right as well as a pearl and bead stringer.

The jeweler is hosting a going-out-of-business sale beginning Monday, April 19. Like their peers who’ve recently retired, Doug and Jacki say that what they’ll miss the most is working with their customers and being able to provide jewelry to mark their most important life moments. 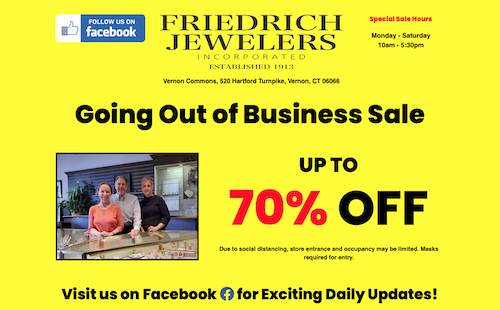 Next article:
Did You Miss Sales Strategy for April 16 2021?