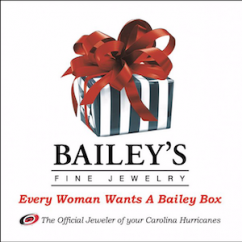 Los Angeles, CA—Transplanted North Carolinians and other fans of Bailey’s Fine Jewelry can now get one of the jeweler's famous striped boxes (image) in California. The retailer, one of North Carolina’s leading luxury jewelers with four stores in and around the Raleigh area, recently added a fifth location—2,500 miles away in the heart of the Los Angeles diamond district.

Although the jeweler’s roots are in North Carolina, Bailey’s boasts a nationwide customer base. Its new California outpost, a by-appointment-only office in the 607 Hill Street jewelry building, was the subject of a profile in the Triangle Business Journal.

Bailey’s was founded in Rocky Mount, NC, in 1948 by Clyde Bailey Sr. and his wife, Ann, affectionately referred to as “Mama Ann.” The original store was more of a discount operation, selling wedding rings on layaway to farmers at a dollar a month, as well as a variety of non-jewelry merchandise including even Motown and Beatles records, a sure-fire way to draw a crowd in the early 1960s.

Following Clyde’s tragic death of a heart attack at age 46, Ann—no stranger to hardship—not only continued to operate the store on her own, but soundly disproved all the men in town who bet that a woman couldn’t succeed on her own.

The business continued to expand with the second generation: Clyde Bailey Jr., Ann and Clyde’s son who, after returning from GIA (Gemological Institute of America) in California, convinced his mother to eliminate all non-jewelry merchandise and move the jewelry offerings upscale. It proved to be a winning formula. He grew his parents’ 11-foot-wide Rocky Mount jewelry store into North Carolina’s largest luxury jeweler (the flagship is an 11,000 square-foot location in Raleigh’s Cameron Village Shopping Center) and transformed Bailey’s into an award-winning AGS jeweler with a team of graduate gemologists, master bench jewelers and watchmakers, and more. Philanthropy also is a central tenet of Bailey’s business, with more than 40 local charities benefiting from the jeweler’s largesse. 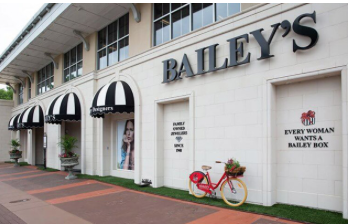 Exterior of Bailey's Fine Jewelry in the Cameron Village Shopping Center. The bicycle also belongs to the jeweler. 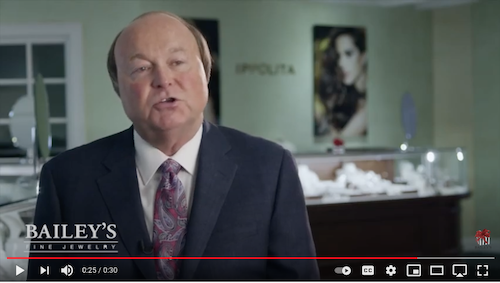 The Bailey Box tradition continues with third-generation CEO Trey Bailey, who like Clyde Jr. pursued a gemological degree at GIA and returned home with new wife Marci to join his father and mother, Jane, in the business. In 2015, Trey Bailey even penned a guest editorial about finding success in The Centurion Newsletter.

The California location is a new concept for the jeweler, two years in the making. The idea developed after seeing an uptick in online sales from California, says the Triangle Business Journal article. Located in an upstairs office, not a storefront, Bailey’s Los Angeles outpost provides high-end loose diamonds, fine gemstones, custom jewelry, exceptional one-of-a-kind pieces, antique and vintage jewelry, and vintage watches.

Opening the new West Coast office, coupled with plans for a new store in Cary, NC, later this year is a balm to the jeweler after a challenging 2020, although like most luxury jewelers Bailey’s did come out of last year relatively unscathed. Thanks to consumers redirecting unspent experience dollars and the federal PPP loans that allowed the jeweler to pay most fulltime staff during North Carolina’s six-week lockdown, revenue ended up roughly even with 2019, Trey Bailey told the Business Journal. From the article:

"Fortunately, our business has not been hit as hard as travel and restaurants, and we were able to hire people back very quickly," Bailey said. "They had to work hard because doing business was a lot more different, but we ended having a good year."

Next article:
Jeweler’s Son, Accomplice Plead Guilty To His Murder