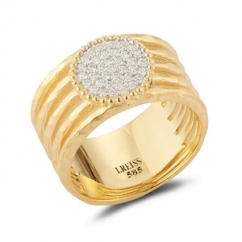 London, UK—Gold jewelry consumption and fabrication both registered a global drop in the fourth quarter of 2018, says the latest GFMS Gold Survey, published by Refinitiv consultancy. North American demand rose sharply but it wasn’t enough to offset declines in the rest of the world. (Left: 14k gold and diamond ring by I. Reiss).

The retail gold sector (coin and bar demand) also declined in the quarter, falling 3% globally. A strong dollar and economy drove North American demand down 28% year on year, while demand also softened in South America, Asia, and India and Chinese demand remained depressed. Only Europe and Africa showed any pickup in this sector, with African demand, mainly coins, jumping 48% and European demand boosted to its highest level since 2016 by concerns over internal politics, weakening trade, and increasing protectionism policies.

GFMS expects gold prices to continue to benefit from ongoing economic uncertainty and a slowdown in the U.S economy. “As we approach the end of the economic growth cycle, demand for defensive assets is likely to pick up as concerns deepen about the widening U.S. budget deficit and as the tariff-driven trade war starts to damage the country’s economy. Gold rallies are more likely to be sustained if investor demand is resilient and broad-based. The scope for rising inflation, the interest rate-hiking trajectory nearing the end of its cycle and a stock-market correction could reignite interest in gold and drive the dollar lower.”

Previous article:
Inside The Mind Of A Millennial Jeweler, Part One: Myths, Realities, And Marketing

Next article:
20 Tips To Keep A Successful Business On Track