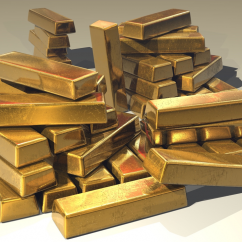 Merrick, NY—Gold pulled back slightly Wednesday morning from its eight-month high of $1,913 an ounce, which came in the Asian markets Tuesday after the Russian incursion into Ukraine. Wednesday morning gold futures, however, had dipped back below the $1,900 benchmark, to $1,898.70. Silver futures prices also pulled back slightly, to $24.16 an ounce.

Although the United States and other Western nations have slapped sanctions on Russia, it does not appear that military action is planned, easing global fears somewhat—at least for now. But Kitco.com analyst Jim Wyckoff warns that a military mistake or a full-blown Russian invasion of Ukraine would be a major shoe-drop that could further destabilize markets.

But apart from the safe-haven investment factor of precious metals, Russia sanctions are likely to impact commodities trade flow, says a report from BMO. Russia is the number-one producer of palladium, with 39% of the world’s supply, a critical metal for the automotive industry. Prices already are up 24%. Russia also is the world’s number-two supplier of platinum, expected to produce 11% of the world’s platinum supply, 9% of world gold supply, 6% of silver and 8% of rhodium supply, the report said. Additionally, Russian coal and gas exports could be shifted away from Europe and North America and toward China, and crude oil process could spike as much as $120 a barrel.

Next article:
Key Global Brands, 1,000+ Manufacturers To Exhibit At VicenzaOro