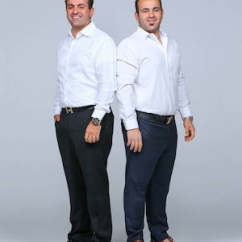 Fullerton, CA—Happy Jewelers, a second-generation store run by brothers Gabe and Danny Arik, has even more to be happy about. The store was the subject of two laudatory feature articles in one week: one in The Open News and the other in a business publication called TechBullion. Image: Jewelers Gabe and Danny Arik.

Happy Jewelers traces its origins back more than 40 years. Isa Arik, the son of a Turkish farmer, developed an eye for quality at a young age and, after becoming a sought-after jeweler in his native Turkey, emigrated to the United States in 1993 with his wife and four children.

He settled in Los Angeles, where he opened a modest manufacturing facility in the Los Angeles Jewelry Mart. Two of his four children, sons Gabe and Danny Arik, co-founded Happy Jewelers practically out of high school, growing it into a high-end store in Fullerton that specializes in diamonds, bridal jewelry, custom design, and luxury watches, and counts several high-profile sports figures and music celebrities among its clientele.

“Life is a journey and jewelry helps to commemorate those special moments in someones life. Whether it’s an engagement, birth, wedding, anniversary, graduation, or just because, jewelry is a symbol of love and admiration and that’s what I love, helping people create a symbolic memory,” says Gabe Arik, the elder of the two brothers.