Lynnwood, WA--The Jewelers Security Alliance (JSA) has reported that a jewelry thief will stoop as low as to steal from a not-for-profit animal rescue charity.

On February 15, the white male suspect shown here carried out a theft in the Bellas Voice charity thriftshop. See below for link to the video of theft taking place.

He opened the back of a showcase and took a gold cross, the most expensive item in the store. The suspect had visited the store earlier in the day, and returned at 3:00 p.m. The sales associate had walked away from the register for a moment, and the suspect reached behind the showcase, opened the back, reached inside the case and took the cross.

Click the image below to watch the theft take place on the store's surveillance video, courtesy of Q13 Fox Seattle. 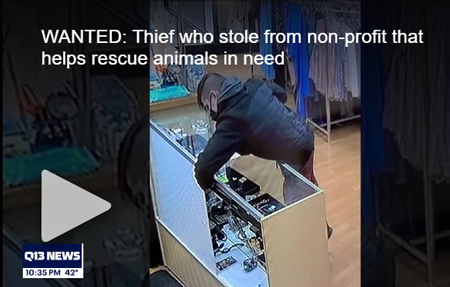 The suspect is described as having hair shaved around the sides and back, long on top, and with a part hanging down to the right. If you have information, contact JSA at 212-687-0328 or jsa2@jewelerssecurity.org. Crime Stoppers of Puget Sound (800-222-8477) is offering a reward of up to $1,000 for information, which can be submitted anonymously, leading to an arrest in the case.

"To be honest, that's the most expensive item we have in our store, or had in our store, so it was a pretty big hit," said shop owner Cami Ovena in a story by Q13 Fox Seattle. "We're supporting the Feral Cat project this month, so we were hoping that money would go to help spaying and neutering feral cats this month, so it was pretty hard." Click here to read the full article.