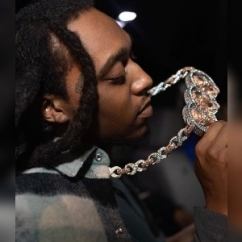 Houston, TX--Celebrity jeweler Johnny Dan revealed that TakeOff and Quavo visited his business hours before the shooting incident that claimed the rapper's life.

According to a news report, surveillance videos from Johnny Dang & Co. Fine Custom Jewelry on Richmond Avenue showed TakeOff entering the store with his group around 7 p.m.

"I was excited because we stayed open late because that’s convenient, I always take care of them,” Dang revealed in the report, adding that TakeOff and Quavo were in the store to get some pieces cleaned and look at a few other items.

It's all quite unbelievable for the jeweler. "He sat right there on Monday night, and Tuesday yesterday morning it happened," Dang noted in the report. "I felt like wow."

The rapper was killed after an argument at a bowling alley rented out for a private party.

Dan stated that TakeOff had nothing but love for people when he came to Houston.

"Whenever they come to Houston, they just stop by, hang out and buy some new stuff," Dang said of the 28-year-old, describing him as a soft-spoken person who kept to himself.

Learn more about Dang's thoughts on TakeOff and the shooting incident in the report.

Next article:
How Jewelry Brands Find a Way Out Of The Supply Chain Crisis