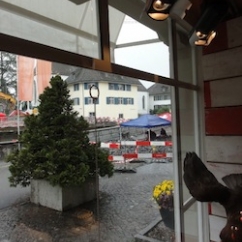 For 29 years, Swiss-born goldsmith Christoph Krähenmann lived and worked in California; 17 of which as owner of his own atelier in Santa Barbara before returning to his native country in 2010 to open a retail shop there. Moving home was wonderful—until the construction started. A major project (left) that began in front of his gallery near Zurich last April (2013) will continue at least through the end of September of this year. The constant hammering and banging were bad enough, but to add insult to injury, Krähenmann doesn't have a single space for customers to park while they shop. And while it’s one thing to be a destination store, it’s quite another to be a destination on a one-way street that's being torn up. 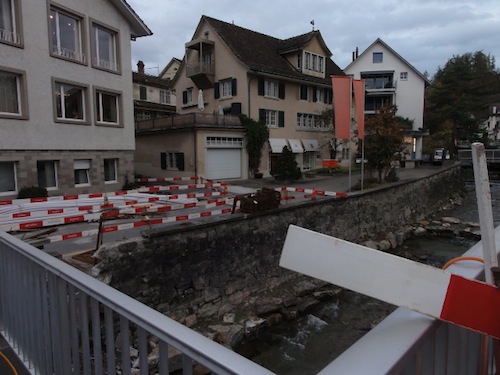 Another view from the gallery of the construction out front. A canal already divides the street, so having part of it closed off was even harder.

But one day, Krähenmann found a way to turn his frustration into creativity.

“It was difficult to stay positive or become positive, but a few months ago I suddenly had a flash when I saw the construction site reflected in my window display,” he told The Centurion. “I then realized that I could use my creativity to do a ‘construction window!’ A bit nuts, but it looks absolutely amazing, and truly one of a kind as well.” 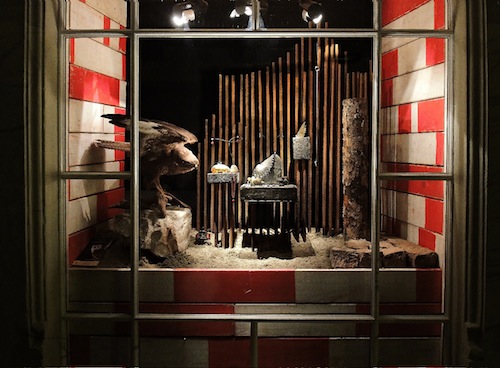 Goldsmith Christoph Krähenmann found a creative way to deal with disruptive construction outside his gallery. He used bits of concrete, cobblestones, rusted pipes, rebar, a stuffed buzzard, and barrier material to create an innovative display.

A display window is like your business card, says Krähenmann, so he wanted his window to reflect his love of different textures and innovative materials, and his ability to find the beauty in something most people consider an eyesore. 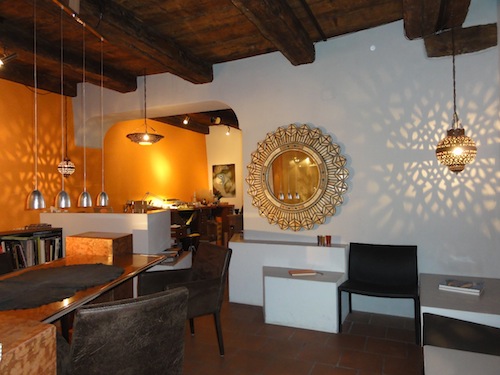 Interior of the gallery, located in a 500-year-old building with the original beams exposed. Three Moroccan lights divide the storefront and the workshop, and a large mirror is also from Morocco. The table to the left is of Italian marble.

“I used these elements because of my Nile Collection, to create a connection to North Africa and its different cultures situated all the way towards Egypt,” says Krähenmann of the interior fixtures. Because his family lived in Sudan when he was a very young child, Africa remains very important to him creatively.

To create the construction-themed window, he incorporated materials such as the cobblestones being used for the pavement surface in front of the store. He added rusted iron rebar rods, a corroded water pipe, rocks from a broken down wall, and pebble stones, as well as the red and white construction panels used to close off roads in Zurich.

He also obtained a stuffed buzzard from the local Natur-Vogelschutzverein Küsnacht (a nature conservancy organization). The bird is "hunting" a silver mouse with rose-cut black diamond eyes that Krähenmann made for her, below: 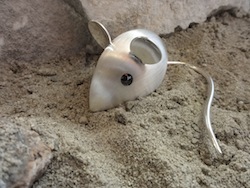 A situation like this that challenges a business owner every day really does test one’s character, says Krähenmann. But he’s pleased with the outcome. It’s definitely not the typical window of purpose-built jewelry displays but it does fit both the current situation and reflects the fact that his jewelry creations span the gamut from classic to truly avant-garde. In fact, he was so pleased with the creative inspiration that resulted from the chaos that he doesn’t even find the daily hammering irritating anymore. In fact, he says, he’s rather come to enjoy the sound because of the creativity it represents.

“It changed my whole attitude towards this construction site, and I was able to make peace with this situation. In some degrees I love the construction site, because I could really create something that gets noticed and it also shows my creativity. And it shows how one can turn something negative into something very positive!” 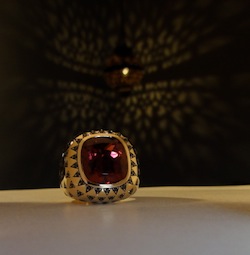 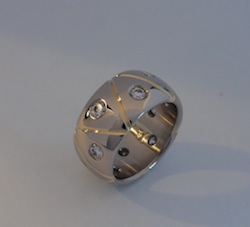 Above left, a women's ring featuring a large center rubellite with black diamonds  set in 18k yellow gold. Right, diamonds are set in 18k white gold with engraved yellow gold inlay. Below left, "Jealous Pearl" multi-colored pearl necklace features a pearl hiding in a clasp of 18k yellow, white, and red gold. Right, a sculpture Krahenmann made for a Swiss hockey champion of the 1980s. The puck on bottom is made of granite with pyrite Inclusions, and the quartz, set in sterling silver, represents the ice. It can be turned 360 degrees to view from any direction. All, Christoph Krahenmann. 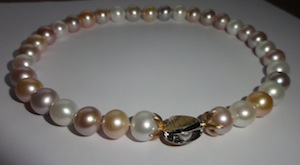 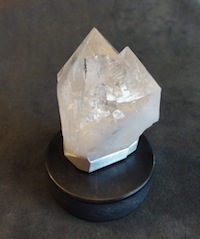