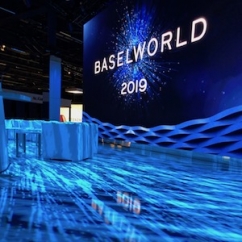 Randolph, NJ--Last Wednesday I finally returned from my 10-day Swiss junket that included a three-day stop in Davos with Movado (that’s an upcoming story in itself) followed by six days in Baselworld.  Here, I bring you an insider’s view of what Baselworld really went through this year  — the good, the bad and the ugly. And, believe me, as I have attended Baselworld for 35 years now, I think I’m a good judge.

There is no denying that traffic was down significantly, as were exhibitors. In fact, across the board there was about a 22 percent decline in visitors (81,200 attended this year) and brand exhibitors (520 showed this year). About 10-12 percent fewer journalists attended, as well. But still,  3,300 bloggers and journalists  made the trek this year. Despite the numbers, there was a quiet excitement in the air  — for a host of reasons — not the least of which was curiosity… What will happen to Baselworld?

This year, I was asked by the Fair organizers, MCH Swiss Exhibition Ltd.,  to be a Baselworld Brand Ambassador. I wasn’t sure exactly what that meant — other than the fact that I, along with about 30 of my global colleagues — had been elevated to VIP Press status. We were treated to an insider’s first-look at the halls — three hours before others were allowed in. We were taken  on a tour by the new Managing Director of MCH, Michel Loris-Melikoff, whose honesty was refreshing. As we walked all three levels of Hall 1, he didn’t sugar-coat the fact that the fair had lost exhibitors. He wasn’t arrogant, but rather apologetic for the actions of previous management and hopeful that those who attend  this year’s transitional fair would be positive and supportive of the changes. He laid out his vision for the 2020 Baselworld fair and — in general — left everyone with a pretty good attitude about the new direction. 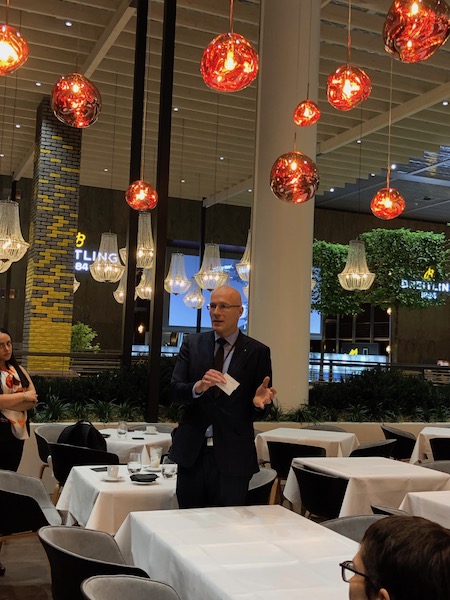 However, as a journalist, I wasn’t allowing the wool to be pulled over my eyes that easily. I decided i would reserve my judgement until the end of the show. With the entire Swatch Group gone from the middle of Hall 1- but having already paid their fees for the space — the fair was unable to put any other brands in the Swatch Group area. There was a lot of speculation that the Fair was leaving the space open in case Swatch Group wanted to come back — an option Nick Hayek Jr. squelched just days before the Fair opened when he announced Swatch Group would not be returning.  Swatch Group was already in the throes of executing its first-ever summit (much the same as Movado had done the year before after pulling out of Baselworld in 2017). In fact, retailers carrying the top-tier Swatch Group brands (Blancpain, Breguet, Jaquet Droz, Glashutte Original, Harry Winston and Omega)  were treated to a full day of new product presentations in Zurich (an hour away by train) during Baselworld, and select press will be seeing all of the new product in mid-May in a similar summit in Geneva.

The Halls and Brands. In terms of layout in Hall 1: the previously Swatch Group-occupied space this year became a large open hallway with a rippling water element, flowering trees and bushes and seating all around.  On one side, there was a restaurant with ample seating (that was crowded every day at lunch time), and a Grab-and-Go sandwich and salad stop (with high prices).  There was also a Breitling restaurant reserved for the brand’s top guests. On the opposite side of the hallway was the Press Room, which I referred to as the fish bowl. On more than one occasion, when I was there, I heard my name being called out by retailers or exhibitors passing by and wanting to say hi. I liked the convenience of the press room there, but not the fish-bowl setting. Next year, we already know that the press room will be moved yet again. Something we journalists have gotten used to.

Further back in the Hall 1, where Raymond Weil used to be, Porsche Design brought in three cars, which drew a lot of attention from the public over the weekend. Just a little ways up the hall from the cars, the champagne stand that had been outside in previous years was brought inside and occupied a large booth space with a living-room style seating area. According to Loris-Melikoff, “We opted to focus this year on making the halls look better and have more assets than focusing on the outside. Especially since we did not know how the weather would be.”

The one thing that struck me about the layout of Hall 1 was the openness. It seemed larger and you could actually see from the front doors all the way back to the Breitling stand two-thirds of the way back in the hall.  Between the brand’s large-screen built into the booth (where the fish tank used to be) that was always playing the brand’s “Squad on a Mission” videos, it’s restaurant, and its bold neon signs, the Breitling visibility may have stolen the show. “It is Breitling Avenue,” quipped Georges Kern, CEO of Breitling, during a private interview.  “We are the Arch De Triumph of Basel this year.”

With all of that great visibility, I wondered if Breitling would return next year.  According to Kern, the answer was “Not with this booth. Fundamentally, I would prefer having one show, not two, and fundamentally I would like it to be in January not April or May. We are going to launch our products in January anyway, so what I told them [MCH] is that they need to be flexible in the format. I don’t need a booth to sell watches, we have had five summit presentations here with 400 to 500 people at each one over the past few days to give them the Breilting experience. For us, that is the key. We will not be here with the booth anymore, but we asked if there is a way … that we can implement the format we wish for, the summits. Is Basel flexible enough to accommodate different formats or those who want it? It is not a ‘one size fits all’ any more. We need other formats.” 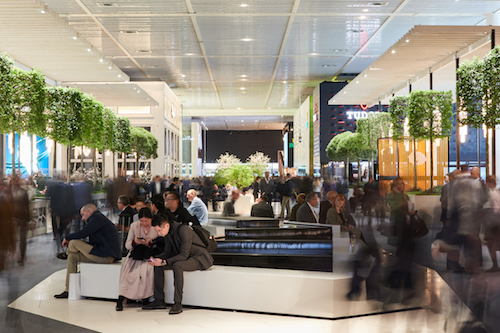 There were also rumblings that Rolex was reconsidering its return. Rumors that LVMH Group might be leaving. The same with Chanel. Thus far, none of these withdrawals have been confirmed. However, it is interesting to note that next year, with how late the two shows will be running (April/May), certain brands will need to show product earlier and may opt for their own traveling summits.  Additionally, it no longer makes sense for the LVMH Group, and a few others, who currently show in the city of Geneva during SIHH in January and then again in Baselworld, to show in both places. The question becomes, “Which city will they choose to exhibit their wares in?”.

Back to the Baselworld Halls, Hall 1.1 remained pretty similar to what it had been, with Roberto Coin now taking the space previously occupied by DeGrisogono, and a few other changes. (The space that had been Swarovski was now a food court with seating.)  However, upstairs in Hall 1.2, where some watch brands still exhibit alongside a host of jewelry brands,  there was a great open space with a stage for press conferences and for fashion runway shows.  In my opinion this should have been situated in hall 1.1 instead — maybe where Swarovski had been — to make it more visible to passers by. Still, nearly a dozen brands booked the space for fashion shows and the Fair held its opening and closing press conferences there.

Like the press, the independents — occupying a space called Les Ateliers — were moved yet again. With the “palace” gone a few years ago, they had been moved upstairs in Hall 1 for the past two years. This year, they were moved across the street into Hall 1 South — opposite the main entrance to Hall 1 North. They occupied the space previously used by the entire Movado Group. Their space was ample and easy to work. It still had a little bar/food counter and generally was busy. I thought, however, that the area needed a lot more signage outside, pointing visitors to the Les Ateliers exhibitors.

Upstairs in that building — where the press room had been last year — was a new exhibition space called “Incubator.” For me, this was particularly enjoyable and I wished I had visited sooner than the last afternoon, because I would have enjoyed spending more time there. Essentially, counter-after-counter was set up with individual smaller brands showcasing their products.  Singer Reimagined was there (sorry, by the way, but every time I came by you were busy), Ikepod, Riskers (this is an interesting story that will be forthcoming), a great brand called Karsten FraBdorf (another upcoming story),   my old and dear friend Gilles Robert with a great line called Dentille, and more. It was sort of a fun, easy space where you could find a few young, new brands.

There were still the hangers-on who exhibited over at the Hyperion hotel, and a few at the  Hotel Le Plaza (Swissotel). Additionally, as they did last year, Mondaine and Luminox, as well as Reuge Music, took store-front space on Claraplatz, just a block away from the Fair.  Somehow, I can’t help but feel that if Baselworld management had found a way to bring all of these outside exhibitors back into the Fair, perhaps instead of the Porsche Design cars and the champagne bar, it would have been a stronger show. The cars and the champagne could have remained outside to brighten the space and once again act as a gathering spot.

Of course, according to Loris-Melikoff, maybe a few of these brands will come in next year, when, he says, costs to exhibit should be down by 15 percent or more. Again, however, the timing of the show next year makes it difficult for many brands because it is so late in the year. Retailers need to plan ahead especially for the holidays and that means seeing product earlier and making decisions earlier. As such, many brands will be implementing retail and press tours to show their products, and with that expense globally, the question is do they need to exhibit.  The flip side is that next year, Baselworld promises to have many new spaces and types of exhibits in play (including a Blue Room for presentations  that may answer Breitling’s call) — making the show much more visitor-friendly, exhibitor-friendly and relevant in today’s instantaneous social media world.

So, in short, the good, the bad and the ugly of Baselworld (and my judgement of it):

The good: There was plenty of time to see more brands and executives, and to do more networking than in the past.There was still an enthusiasm in the air. Certain watches.

The bad: The undeniable loss of traffic and  exhibitors. Certain watches.

The Ugly: The outside of the fair just wasn’t the same. Sure there was the sausage stand and the little restaurants at the corners of the Fair buildings, but without the beer and champagne stands, without the music at the day’s end, it seemed a bit flat and boring. Certain watches.

As to the “Certain watches” part of the good, bad and the ugly … stay tuned. That’s another story.

Click here to read more about the new watches and other news from Baselworld on ATimelyPerspective.com