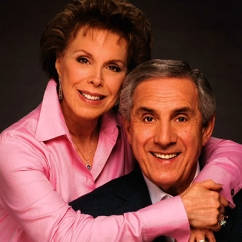 Buffalo Grove, IL—Alan I. Kadet, chairman of the board of the Illiniois-based jewelry chain Rogers and Hollands Jewelers, died April 3. He was 91.

Kadet was a decorated WWII veteran, having received a Bronze Medal from the United States Army during his service. After his discharge, he met and married Juell Friedman (shown together in the photo at left), daughter of Bernard Friedman who, together with partner Herbert Goldstone, had founded Rogers Jewelers in 1945. Kadet joined the firm in 1949, rising to president and later, upon Friedman’s retirement in the 1980s, chairman.

The company expanded through the 1980s and 1990s, adding stores in Indiana, Missouri, Michigan, and Minnesota, and acquiring Armond’s Diamond Centers, an eight-store chain in Illinois and Wisconsin. By the end of 2001, the company had 64 stores in six states, having expanded into Ohio. The company also added the trade name Ashcroft & Oak Jewelers, and throughout the 2000s added new stores under that name in Kentucky, Tennessee, and western Pennsylvania.

Kadet is survived by his wife of 67 years, Juell, the matriarch and former jewelry designer for the chain. She was a leader in the advancement of women in the jewelry industry, as the first woman to be featured on the cover of National Jeweler and the first woman to be inducted into the magazine’s renowned Retailer Hall Of Fame.