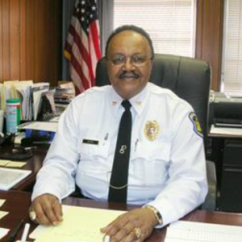 Dorn, 77, was a 38-year veteran of the St. Louis Police force, rising from rookie patrol officer to deputy commander of the Bureau of Patrol Support, said the St. Louis Post-Dispatch.  The unit oversees traffic, mounted patrols, commercial vehicles and the tactical unit. Upon retiring, Dorn became police chief in Moline Acres, a suburb of St. Louis.

He was shot in the torso around 2:30 a.m. June 2, while guarding Lee’s Pawn & Jewelry, owned by a friend of his. His widow, Ann Marie Dorn—herself a sergeant with the St. Louis police force—said her husband sometimes worked for his friend, guarding the shop or answering calls whenever the alarm went off.

He was remembered by all as a kind, compassionate man and public servant who would give his life to save another. Appallingly, spectators shot a 13-minute video of his death—but did nothing to help save his life.

St. Louis police arrested the suspected killer, Stephan Cannon, 24, on Sunday and charged him with first-degree murder. Also arrested was Jimmie Robinson, 27, charged with burglary, criminal action, and stealing for his part in looting the pawnshop.

Next article:
Got News? Let Us Know!