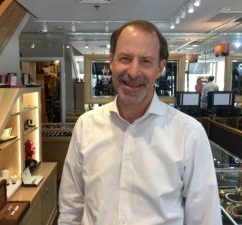 Dallas, TX—Charles Louis Skibell died Sunday after a battle with pancreatic cancer. He was 63.

Skibell, a fourth-generation jeweler, was born February 28, 1956, in Greenville, MS. He began his career at the tender age of 13, working as an engraver in his great-grandfather’s jewelry shop, called Schlom’s. He had a lifelong love of golf, flying and the outdoors. He had a putting green in his backyard even as a toddler and at age of 14, learned to fly with an instructor. He also was an Eagle Scout.

After earning a degree in psychology from the University of Texas at Austin in 1978—where he was a member of the Alpha Epsilon Pi fraternity—he headed to GIA, then in Santa Monica, CA, and earned his GG diploma in 1980.

As a graduate gemologist, he worked in Beverly Hills for a time, then moved to Dallas to work in the jewelry salon at the Neiman Marcus store in Northpark. He launched his own appraisal service, Texas Gemological Services, and opened Skibell Fine Jewelry in 1984, moving to the Preston Center in 1995.

In 2007, Skibell met Lyn, now his wife of 10 years. In addition to his love for Lyn, Skibell loved dogs, especially golden retrievers. He also was a huge St. Louis Cardinals fan, owing to the time he spent listening to baseball games on the radio with his beloved grandfather, Irving Sachs.

Giving back was very important to Skibell. He was a long-time member of The Kiwanis Club and served on the board of the Dallas Hebrew Free Loan Association. Following his love for his own golden retrievers--six in all--he was also involved in numerous charities for animals, and also he remained committed to the Boy Scouts: in 2019 he a recipient of The National Outstanding Eagle Scout Award.

Skibell is survived by his wife, Lyn; aunt and uncle, Richard and Andrea Skibell; step-mother, Betty Skibell; step-sister, Tracee Skibell; sister-in-law, Pam Montgomery; aunts, Margaret Sachs and Rochelle Skibell; and many cousins and friends. He was preceded in death by his parents, Joanne and Bernard Skibell.

A memorial service will be held Friday, October 4 at 2:00 pm at Temple Emanu-EL, 8500 Hillcrest Road, Dallas, TX, 75225. In lieu of flowers, the family asks that memorial donations be made to any of the following organizations: Dallas Hebrew Free Loan Association, Kiwanis Club of Greater North Plano, or Golden Retriever Senior Rescue.