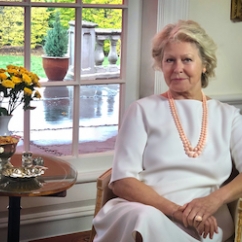 Lang Assael was born in Karlshamn, Sweden on June 15, 1946, the daughter of Elsa Charlotta and Gosta Robert Lang. After receiving an International Baccalaureate in Modern Languages, she traveled abroad in 1968 to begin a 13-year career as a model and commercial actress in London, Paris, and New York. She entered the Manhattan art world through Sotheby’s, serving as a liaison to top clients, while earning a Certificate of Interior Design from the New York School of Interior Design. She then created her own business as a private advisor, acquiring fine art and antiques for connoisseurs and collectors.

It was at Sotheby’s that Lang Assael first heard the name Salvador Assael, the legendary “Pearl King” in the 1970s, when he sold the first-ever gem Tahitian Pearl necklace at Harry Winston. She would later meet, fall in love with, and marry Assael in 1991, traveling the world with him to acquire the finest pearls and supply them to U.S. jewelry retailers. In 1993 Assael, Inc. achieved the world record at Sotheby’s for the highest price ever paid for a gem pearl strand at auction: $2.3 million, a record that still stands.

A born environmentalist, Christina Assael celebrated the fact that pearls are a renewable, sustainable gem. She also served on the Coral Commission of CIBJO, the World Jewellery Confederation, believing strongly in the importance of preservation and regulation of the ocean’s resources.

“If you are going to live from the treasures of the sea, you must take care of it, protect it, sustain it,” she told filmmaker Dean Love in the 2021 mini documentary titled “Assael Revealed.”

A dedicated philanthropist, Assael fought passionately to create a fairer, greener, and more just society. She supported a wide variety of ecological and animal rescue organizations, including the Sierra Club, the Duchess Land Conservancy, and the Cary Institute of Ecosystem Study. Assael also donated 10% of all pearl strand sales to WWF Australia in early 2020, to help with the bush fire animal rescue and rehabilitation.

In addition to her support for animal conservation, Lang-Assael was a lover of animals on a personal level. She regularly supported the ASPCA and kept horses, donkeys, sheep, cows, and chickens at her home for many years and always had a dog by her side.

Lang-Assael is survived by her children, Sophia and Robert Lang Assael of Millbrook, New York; Edward Opoku of Millbrook, New York; her sister Pia Lang of Vaxjo, Sweden, and Arlette Assael of Arizona; as well as numerous loving nieces, nephews, extended family, great friends, and her loyal staff. The Assael brand will continue as a family-owned company, with senior vice president Peggy Grosz at the helm of the business operations.