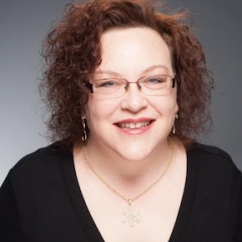 Edelstein—affectionately known by many as the “biz guru”’—began her career in the jewelry industry as a fashion editor at JCK magazine. This brought her in contact with jewelry designers and their work, and she soon came to realize that working with them would be her life's work. In 1991, wanting to support the growth of this segment of the industry, she founded the Jeweler's Resource Bureau with her husband, Frank Stankus, with the idea of highlighting the designers and their work in multiple ways.

Over the years she worked in many roles to that end, including trade show consultant for the JCK show, the Couture show, and the AGTA show as well creating her own designer-centric show, globalDESIGN. She also was a prolific writer about jewelry design and her byline could be found in every jewelry trade publication as well as in industry online columns. With her husband, she co-wrote a book titled Brilliance: Masterpieces from the American Jewelry Design Council, which sold out of its first printing.

Her efforts to help designers at every level brought her some well-deserved recognition. She was awarded the prestigious Benne Award by the American Jewelry Design Council in 1995, and was the 1996 winner of the Contemporary Design Group's award as Best Designer Advocate. She was a long-serving member of the board of the Women's Jewelry Association, to which she devoted many years of volunteer work. In 1990, she received that organization's Award for Editorial Excellence, and in 2001 was recognized again by the same group with its Excellence in Marketing award.

Edelstein was born in Brooklyn and attended schools on Staten Island. She attended college at the Fashion Institute of Technology and earned her bachelor’s degree at Hofstra University.

An industry fund to help Edelstein’s daughter Remy with college expenses has been set up by Erica Courtney, via YouCaring. Click here to donate.

On a personal note, I don’t think it’s possible to say enough about what Cindy meant and gave to the industry. As the shocked news of her passing spread rapidly through social media, the comments lit up as literally hundreds of designers, retailers, and other members of the industry praised her contributions and reminisced about her effusive personality. Read some outstanding tributes by InDesign editor Trace Shelton here, digital marketing and business expert Matthew Perosi here, and Adornmentality blogger Barbara Palumbo here. Friends and colleagues are asked to post their own thoughts on Facebook with the hashtag #memoriesofcindy, to be compiled into an album for Frank and especially Remy.

Cindy and I grew up in this industry together, although she had family roots in it and I don’t. But we both began our own industry careers as colleagues at JCK magazine—she started as a fashion editor while I was a business editor. When she left the magazine in 1991, the Jewelers Resource Bureau she founded would quickly grow from a single desk in her bedroom to the go-to source for jewelry designers.

Cindy came back to JCK a year later, this time on the show production side as the director of the first design center at Jewelry ’92, the inaugural event that later would become the massive JCK Las Vegas Show. As we worked our complementary roles in the design sector of the industry, I truly grew to appreciate her deep love for her designers and how freely and generously she gave of herself to help others. We also worked together on the Women’s Jewelry Association national board for more than 15 years, and her energy was boundless.

Much has been written about Cindy’s no-nonsense directness. That was something else I appreciated. She told you the things you needed to hear, even if they weren’t what you wanted to hear, and she didn’t sugarcoat it. But her honesty was both reassuring and refreshing because you knew she had your best interests at heart, not her own. Luckily, she and I didn’t have many disagreements, but the few debates we had over the merits of one thing or another were good respectful discussions. Her well-known acerbic wit also led to many good laughs over the years as well.

Speaking as a 30-year industry observer, it was largely through Cindy’s efforts that the designer sector grew to be such a powerhouse part of the industry, and any time designers asked me for advice that was beyond my scope of knowledge as an editor, I would send them to Cindy. Even if it wasn’t beyond my scope of knowledge, I sent them to Cindy anyway because I knew she’d think of a hundred more things they needed to know.

Although we had parallel career paths, she unknowingly played an important role in my own career, because her first departure from JCK is what opened the door for me to move from business writing into the fashion and luxury jewelry world that I’ve called home ever since.

Along with the entire industry, I will miss her.