Scarsdale, NY—Richard C. “Dick” Greenwood, a longtime leader in the colored gemstone industry, died unexpectedly on Saturday after a brief illness. He was 70.

Born September 11, 1948, Greenwood grew up in his family’s business, A.F. Greenwood Co. Inc., a colored gemstone and jewelry wholesaler in New York City. He was extremely active in the greater jewelry industry, giving freely of both his time and wisdom. He was a 23-year member of the Twenty-Four Karat Club of the City of New York, serving on its board of directors and as its president. He served on board of directors and twice was chairman of the American Gem Trade Association, recieving its Leon Ritzler Award for service to the organization in 2017. He was both chairman and a member of the board of directors of the Jewelers Board of Trade, president of the New York Jewelers Group, and served on the board of directors the Jewelers Vigilance Committee.

Greenwood was a calm, rational voice in an industry that sometimes can be contentious and filled with large egos. Industry colleagues remember him best for his generosity and wisdom and he was often called upon to mediate disagreements.

“He was a generous man both with his time and energy to serve family and friends. Quick to lend help but not judgment. So many of us looked to him for guidance and advice. He would eagerly help anyone who asked, and remembered conversations you had and would later ask how something turned out,” said Patti Geolat, a Dallas-based appraiser and a longtime colleague.

AGTA CEO Doug Hucker told JCK, “He was always even-tempered, always listened to people, and when he gave advice, you always felt, regardless of whatever side you were on, that he was thinking about what was best for the association.”

Greenwood’s longtime close friend and business partner Doug Parker told National Jeweler Greenwood was “the best friend a person could ask for, and I’m sure anyone in the trade would say the same.” As a further tribute to Greenwood’s character, he also pointed out that the average employee tenure at A.F. Greenwood was more than 25 years; indeed, the newest employees had been there more than 18 years.

On a personal note, I knew Dick from the 24 Karat Club. Although I didn’t work closely with him or know him as well as I would have liked to, he was truly one of the most pleasant and kind people in the industry. As his friends and colleagues have described above, he was humble and without ego, a man who always made time to stop and chat and include everyone in his conversations regardless of whether they had an assistant or CEO title. He had a droll and dry sense of humor as well. He will be sorely missed. 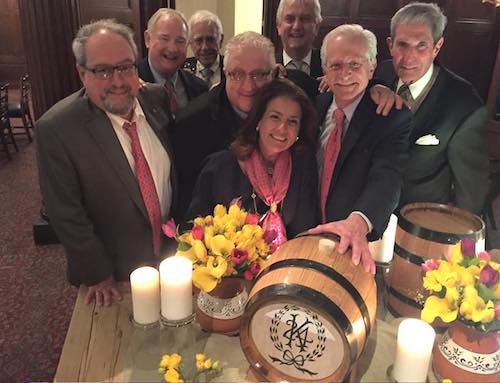 Greenwood is survived by Trudi, his wife of 47 years, son Dan, and daughter Amy. A memorial service will be held this Thursday, April 18, at noon at Riverside Memorial Chapel in Mt. Vernon, NY.