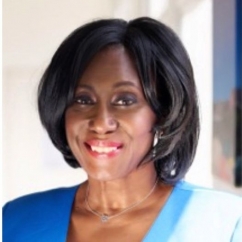 Kinshasa, Democratic Republic of Congo—Dorothée Gizenga, co-founder and former executive director of the Diamond Development Initiative (DDI), died February 18 of complications from diabetes. She was 60.

Gizenga comes from a long line of political activists. She was born in Kisangani (formerly Stanleyville), DRC, in 1961, to Antoine Gizenga, former prime minister of the Democratic Republic of the Congo from December 2006 to October 2008, and Asta Marie-thérèse Mondili. Her father also was the Secretary-General of the Unified Lumumbist Party, a position Gizenga assumed following her father’s death in 2019. Her brother was Lugi Gizenga, another Congolese politician and leader in the Unified Lumbumbist Party, who died in 2020 at age 54.

After spending 37 years in Canada, where she earned a degree in economics from York University and a master's degree in chemistry from the University of Saskatchewan, Gizenga returned to the Democratic Republic of the Congo in 2019, when she became Secretary-General of the Unified Lumumbist Party. Her brother put her in charge of organizing a party unification congress. After her brother's death in June 2020 she assumed several positions within the party, including PALU representative in Canada and assistant coordinator for external relations.

In an online tribute, industry journalist Peggy Jo Donahue, who served as a member of the DDC advisory council and a volunteer communications specialist, wrote the following:

“This fierce, proud woman taught me so much - practically everything I know that matters - about the challenges of poor artisanal and small scale miners of precious metals and gems, especially in Africa. The DDI that she helped create is the model to which all others should aspire, in working to empower these miners, who often have no other way to earn a living in the regions where they live.

“Empower” is the most important word Dorothée taught me. Our efforts in the “rich” developed jewelry industry to “help” miners should not solely involve charitable donations, she once tartly reminded a young, idealistic diamond mining executive, after he heard about the atrocities of blood diamonds and started a small mining operation in Sierra Leone. He was also in the process of building a school near his mine.

“And do you have the government sharing in the costs and administration of your school?” Dorothée asked. The man admitted that he was paying for everything. “What will happen if you go out of business? It should be the duty of government to provide ongoing support and you must compel it to get involved in some way.”

She continued: “Also, what are you teaching those miners in terms of how to run their own operations responsibly, if you or your managers disappear? In other words, are you empowering these people - or are you keeping them dependent on you?”

No one was more practical or more determined to create truly sustainable change in the world of small mining than Dorothée Gizenga - and I will honor her memory, and the lessons she taught us all, till the end of my days. Rest In Peace, dear Dorothée.”

Next article:
Tips to Charm Your Retail Partner – Part 1 of 2