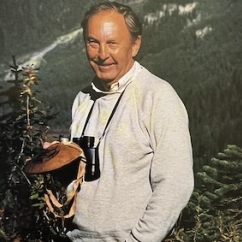 Downingtown, PA--George W. Holmes, who served as editor-in-chief of JCK magazine for more than two decades, died June 20. He was 93.

Holmes was born in Dublin, Ireland, in 1928. His father was a captain in the British Army during World War I and was a victim of chemical warfare on the Western Front. Holmes was the youngest of three sons, but never knew his father, who died of pneumonia before his birth.

Holmes and his brothers were granted the right to be educated at a school for the children of families with limited means. Recognizing that young George was gifted, the school’s headmaster worked to ensure that he was admitted to Trinity College in Dublin, where he majored in modern languages, graduating in 1950. He also traveled extensively around Europe, which at the time was still recovering from World War II.

Committed to becoming a journalist, Holmes applied for a job at The Irish Times. One of his early stories was about a hen who was raising pigeons as her own. Written in a droll, tongue-in-cheek style, the story made the front page and his journalism career was launched.

In 1954, Holmes was one of only two foreign journalists to win a fellowship from the University of Michigan. Like he had done in Europe, he traveled extensively around the United States during his school breaks. He spent the second year of his fellowship writing for three Michigan newspapers, and also wrote a series of articles for The Irish Times, chronicling his impressions of post-war America.

At the end of the fellowship, he moved to England to work at The Manchester Guardian, but returned to North America in the late 1950s, where he worked for the Detroit Times, The Globe and Mail in Toronto, and The Wall Street Journal.

In 1963, Holmes took a job with a Philadelphia-based business and trade magazine covering the jewelry industry, called Jewelers’ Circular-Keystone (JCK). He spent five years at the publication and rose to the rank of managing editor.

In 1968, he left, and with several associates founded Focus, a Philadelphia regional business weekly, the first publication that covered in-depth business news for the Philadelphia area. But when staff disputes broke up that team in 1974, Holmes and his friend Charles Bond were lured back to JCK as editor and publisher. Deborah (Debbie) Holmes, whom George had married in 1971, was already a masthead editor at JCK and, eventually, rose to managing editor. The two remained in those positions for more than 20 years.

Over the years of Holmes’s leadership, JCK became the leading international jewelry publication in its field, earning its editors 16 Neal Awards and earning Holmes a prestigious Crain Award for distinguished editorial achievement from the American Business Press.

During Holmes’s tenure, JCK tackled all the important issues facing jewelers. Award-winning investigative articles on jewelry fencing, shoddy appraisal practices, diamond and gem mining, the near collapse (and rebirth) of the Swiss watch industry, and undisclosed gem treatments were just some of the topics that appeared in its pages, along with useful, practical, and expert advice for working jewelers, as well as regular statistical and marketing data updates.

Holmes also was a member of the launch team of the first JCK Show in Las Vegas in 1992, which soon became one of the largest jewelry events in the world.

George and Debbie Holmes retired—the first time—in 1996. But a scant year later, both returned to the helm of JCK, after most of the editorial and sales teams departed to launch a rival publication. The late Rick Bay, then group publisher at Chilton Co., JCK’s parent, asked the couple to come back to work to rebuild the staff and keep the magazine going. The Holmeses happily complied, and spent another two years working to modernize JCK and expand the JCK group into a truly global entity before retiring again, this time for good.

On a personal note, George Holmes was not only the man who brought me into the jewelry industry, but a wonderful mentor throughout my career. From my first day at JCK in January 1986 through my tenure as its fashion and luxury editor and, eventually, its editor-in-chief—and even through my tenure as editor of The Centurion Newsletter—George always had sound advice and an excellent perspective on everything.

I remember the first time I had a major showdown with a group publisher and vice president at Reed Business, the company that bought JCK from Chilton. It was shortly after I became editor-in-chief, and we had just published a major investigative article about the development of diamond treatments to improve color. The article was 100% accurate, but one of our biggest advertisers was furious and pulled a 12-month spread program. After a shouting match with the group publisher, I called George to ask his advice. He said, “If you don’t piss someone off occasionally, you’re not doing your job. Don’t worry about it. They’ll get over it and they’ll be back.”

JCK was a very unusual workplace because of George. Its editorial staff tended to form tight friendships, and of course was committed to excellence. When George was once asked how it was that he achieved this rather magical combination, he replied, “I always try to hire intelligent oddballs.”

I’m incredibly proud to be counted among those intelligent oddballs, and to have had George and Debbie as my teachers both early in and throughout my career.

After fully retiring from JCK, the Holmses were founding members of the East Brandywine (PA) Open Space Committee, and volunteered for Meals on Wheels in Chester County, PA, for many years. George Holmes handled consumer inquiries in the Better Business Bureau’s Lancaster, PA office for two years, and reported and wrote the East Brandywine township newsletter, The Milemarker, for 12 years.

Holmes is survived by his wife, Deborah, a native of Chadds Ford, PA. Along with Debbie, George Holmes was an avid reader, gardener, animal lover, and hiker. The couple returned many times to vacation in favorite national parks including Banff and Yoho in Canada, Acadia in Maine, and Saguaro and Chiricahua in Arizona, and always had a pet golden retriever, along with multiple cats, at home.

At press time, plans for a memorial gathering were in the works. Memorial donations may be made to: