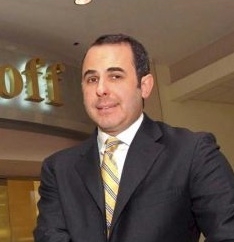 Manhasset, NY—Louis Fortunoff, son of Helene and the late Alan Fortunoff, died October 20 of pancreatic cancer. He was 47.

Fortunoff was an executive of the former Fortunoff department store chain. The company, founded in 1922 in Brooklyn by Max and Clara Fortunoff, specialized in jewelry, home furnishings, and outdoor furniture, and at one time boasted a total of 34 stores in the New York City metropolitan area and Pennsylvania. It was a well-known force in both the jewelry industry and the home furnishings industry prior to its sale in 2005 and eventual liquidation in 2009.

Although Louis Fortunoff was not as visible in the jewelry industry as his mother, Helene, and sisters, Esther Fortunoff Greene and Ruth Fortunoff Cooper, he played an instrumental role behind the scenes at the company, driving much of its expansion. According to his obituary in Long Island Newsday, he began working at the family’s company in 1988, after graduating from Yale University with an English degree and earning an MBA from New York University's Stern School of Business. He held roles in operations, finance, public relations and merchandising, before the family sold the business in 2005.

In the early 1990s, he played a key role in developing The Source, a shopping center in Westbury, NY, that was built up around the firm’s flagship store; and later in building another Source in White Plains, NY, around 2002. Both required working to gain approval from the community, which Fortunoff successfully accomplished after some difficulty.

Fortunoff also was certified as an investment manager in 2003, and managed the family's investment portfolio.

Fortunoff’s brother David told the paper that after the business was sold, Louis spent his time catching up on family, having sacrificed a lot for the business in his earlier years. "The only holiday that we got to celebrate [before the business was sold] was Christmas, even though we were Jewish," David Fortunoff told the paper. It was the only day off the family had during the fourth quarter, and they always spent it together watching movies all day long.

While Louis Fortunoff was not a household name on jewelry industry boards the way his mother and two sisters were, he did at one time sit on the board of the New York State Jewelers Association and was active in philanthropy in other areas. He served on the boards of Israel Discount Bank and the foundation for SUNY College at Old Westbury, and was a longtime member of the Association for a Better Long Island. He also was extremely active in the Fortunoff Holocaust Archive at Yale University, which his late father had established while Louis was a student at Yale. A repository of oral testimonies from Holocaust survivors, the Archive just celebrated its 30th anniversary.

Memorial donations can be made to the Fortunoff Video Archives for Holocaust Testimonies at Yale University or the Lustgarten Foundation for Pancreatic Cancer Research.

Previous article:
WHAT WOULD YOU DO FOR A GOOD BENCH JEWELER?