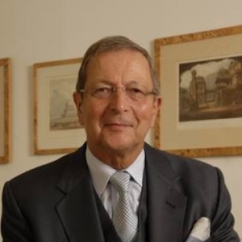 London, United Kingdom—Mark Boston, former CEO of H. Goldie & Co., one of the original six De Beers diamond brokers, died Tuesday after a prolonged battle with cancer. He was 72.

Boston’s distinguished 45-year career in the diamond industry began as a trainee broker and rough diamond sorter at De Beers in the 1960s. He also learned to sort polished diamonds at S. Grunberger & Son in Antwerp, Belgium.

He was brought into H. Goldie’s business a few years later and quickly distinguished himself as one of the very first diamantaires to see great potential in India. His visionary efforts, which started when he first visited Mumbai in 1964, were key to launching India into the diamond-industry powerhouse it is today. He started representing many leading Indian companies over the years, actively engaged in obtaining direct rough supply to them and helping them become De Beers sightholders despite opposition from other diamond centers. He retired in 2015 and closed the company.

He also was unique among diamantaires in his staunch advocacy for design. As early as 1990, he began to argue that volume and price alone would not sustain the Indian diamond industry—or indeed, the global industry—without well-designed finished diamond jewelry with a fashionable appeal. He helped to establish the Indian Design Competition, a program instrumental in the development and recognition of India’s talented young jewelry designers. To underscore his belief in the importance of design, he established the H. Goldie Jewellery Design Award at GIA's London office in 2010. The award continued under the same name until this year, when it was renamed GIA London Jewellery Award.

Colleagues in the industry, however, remember Boston’s incredible kindness as much, if not more, than his groundbreaking vision.

“He was, without a doubt, one of the nicest people in the industry you’d ever want to meet,” said Russell Shor, senior industry analyst at GIA. “As influential as he was, it never went to his head.”

"The world has lost a truly gentle, gentleman. A legend in the diamond industry, a man of enormous grace, dignity and kindness to others," said Andrew Bone of the Responsible Jewellery Council in a post on Facebook.

Boston endured more than a few harrowing moments in his work in India. Once during a jewelry show there he and his colleagues were forced into hiding during a bomb scare, and in 2008 he and his wife, Mily, were at the Taj Hotel in Mumbai for the Diamond Trading Company’s year-end meetings when the terrorist attacks on the Taj and Oberoi hotels occurred. The Bostons were trapped in their room while the hotel burned around them. They climbed down a fire ladder and ran to the nearby Diplomat Hotel where one of H. Goldie’s clients got through police barricades and rescued them to safety.

On a personal note, Boston was indeed one of the kindest people in the global jewelry industry. When I was still a young editor at JCK, he arranged for me to meet top leaders at De Beers’ former Charterhouse Street headquarters in London. Though as a member of the press I would certainly have been welcomed, without Mark’s influence I would not necessarily have gained access to interview the then-CEO, Michael Grantham, or the head of De Beers’ formidable market research department. Years later, on my first trip to India, he arranged for me to interview the heads of all the top diamond companies there.

Boston’s kindness extended far beyond the realm of business. Anytime I happened to be in London—whether for business or holiday with my husband—he sent H. Goldie’s driver to fetch me from Heathrow and deliver me to my hotel, even though the U.S. flights arrived at 6 a.m. and my hotel was usually smack in the middle of central London. We always managed a meeting, whether in his offices with the H. Goldie staff to discuss the state of the U.S. diamond market, or with his family for dinner.

Boston is survived by his wife, Mily, and three daughters, Jessica, Rebecca, and Rachel, a jeweler in her own right who carries on her father’s belief in the importance of design.

Next article:
Classified: Andy Concool, Experienced Jewelry Veteran, Looking for My Next Opportunity