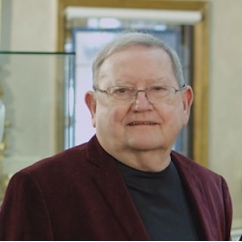 Jones was born in 1936 in Hamburg, AR. A graduate of Hamburg High School and the Georgia Institute of Technology (aka Georgia Tech), he was a member of Pi Kappa Alpha fraternity. An electrical engineer by training, Jones began his professional career working for Arkansas Power & Light, which later became Middle South Services (Entergy) in Pine Bluff, AR. During that time, he spent five years working as an electrical engineer for the distribution company ESCOM in Johannesburg, South Africa.

Following his stint in South Africa, Jones returned to Arkansas and joined Sissy in the new retail business she had founded, a small log cabin filled with antiques and estate jewelry. Murphy was an integral part of the firm’s growth and expansion, from its original log cabin in Pine Bluff to its current four stores in Pine Bluff, Little Rock, and Jonesboro, AR, and Memphis, TN. Murphy Jones became secretary and treasurer of Sissy’s Log Cabin, a position he held for the remainder of his life, and he also served as a past president of the Arkansas Antiques Association.

Together with Sissy, Jones was active in the jewelry industry, serving on various associations himself, and also often accompanying Sissy to industry events hosted by the organizations she is involved with.

Outside the jewelry industry, Jones served on the boards of multiple civic and philanthropic organizations, including the Salvation Army, Kiwanis, and Rotary Clubs. A member of Lakeside United Methodist Church for more than 50 years, he also sat on the church’s board of trustees.

On a personal note, I have known both Sissy and Murphy for many years, but I really came to understand and value Murphy’s soft-spoken yet authoritative presence when I was chief editor of JCK magazine and he came with Sissy to meetings of the JCK Show Advisory Board. In a roomful of often-opinionated individuals—some of whom could be quite loud—Murphy always sat quietly taking it all in. Finally, when there would be a momentary break in conversation, he would calmly and gently speak up. It was a testament to the respect he commanded as the room fell silent while he spoke, and often his viewpoint would be the lynchpin that decided the outcome of that particular debate. 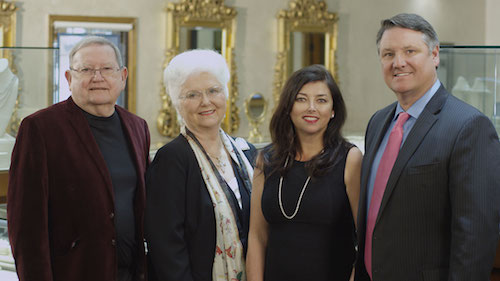 Left to right: Murphy Jones with Sissy, Sharri, and Bill.

Jones was predeceased by both parents and one brother. In addition to Sissy, Bill, and Ginger, he is survived by another brother, Barry Crisman “Cris” Jones; two sisters, Charlotte Virginia McKiever and Angela Nolley Shelton; and nine grandchildren. Two of his grandchildren, William M. Jones IV and Wyatt Champion Jones, both sons of Bill and Sharri Jones, work at Sissy’s Log Cabin, as does Sharri Jones.

Memorial donations may be made to Lakeside United Methodist Church, the Salvation Army, or the Baseball program at Taylor Field, P.O. Box 6654, Pine Bluff, AR 71611.

Next article:
Head-On #11: A Reality Check on Sexual Harassment in the Jewelry Workplace