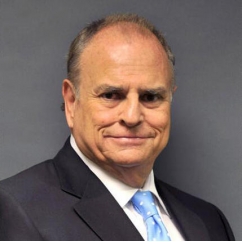 A U.S. Navy veteran, Light worked for two Detroit-area jewelers--Rose and Shifrin-Willens--rising to executive levels at both. He joined Sterling Jewelers in 1977, when it was a 32-store chain based in Akron, OH. By the time he retired, he had grown the retailer into a behemoth publicly-traded company with more than 1,000 doors under multiple banners, most notably Kay Jewelers and Jared the Galleria of Jewelry, a superstore-format division he launched and named for his youngest son. In 1987, Sterling was acquired by the UK-based Ratners Group PLC, now known as Signet Jewelers Ltd., a move that enabled Light to snap up larger and larger regional chains and bring them under the Sterling umbrella.

Light stepped down as Sterling CEO in 1995 and was succeeded by Terry Burman. After Burman’s retirement in 2011, Michael Barnes was CEO until 2014, overseeing the company’s acquisition of rival Zale Corp. Upon his departure, Nate Light’s son Mark became CEO until stepping down in 2017. Today Virigina “Ginny” Drosos, who came from outside the jewelry industry, is the company CEO.

In addition to his role as one of the industry’s leading retail voices, Nate Light was also known as one of the industry’s leading philanthropists. Afflicted himself with rapidly deteriorating vision, he was active with the Foundation Fighting Blindness, and helped to organize the industry’s “Party With A Purpose” in the early days of the JCK Las Vegas show. That event later became the famed Facets of Hope dinner benefiting Jewelers For Children, the industry-wide charity that emerged in 1999 to consolidate the various child-centered charitable efforts going on among industry leaders, including Clyde Duneier's work for the Juvenile Diabetes Foundation.

Light and his former wife, Patti, were committed to JFC, something Sterling continues today as one of its premier sponsors. The retailer also directly supports St. Jude Children’s Research Hospital, Akron Children’s Hospital, the American Cancer Society, the American Heart Association and Diamonds Do Good.

Light received numerous lifetime achievement awards and other honors in the industry during his career, including from the American Gem Society, the Diamond Empowerment Fund, National Jeweler magazine's Retail Hall of Fame, and more.

“Our thoughts and prayers are with Nate’s family,” said David Bouffard, Signet’s vice president of corporate affairs, said to National Jeweler. “In honor of his contributions, and in line with the cause he cared deeply about, Signet’s Love Inspires Foundation has made a donation to the Foundation Fighting Blindness.”

Light is survived by his wife, Candace; five children, Shelly and Michael Paolercio, Cheryl and Scott Golant, Mark and Andie Light, Alyse and Doug Storm, and Jared Light; as well as numerous grandchildren, great-grandchildren, and other family members. Memorial donations may be made to Chabad of Palm Beach Gardens, 7026 Fairview Lane, Palm Beach Gardens, FL 33418, or to the Foundation Fighting Blindness, P.O. Box 17279, Baltimore, MD 21297.