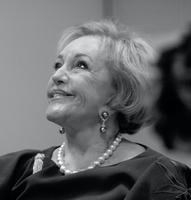 Ruthie was born July 10, 1929, in Dubienka, Poland. While she was a child, her father and uncle had immigrated to the United States, settling in Kansas City, and working tirelessly to raise money to bring the rest of the family over. In December 1938, Ruthie, along with her older sister and mother, arrived in the United States and were reunited with her father. As the Holocaust and World War II were unfolding, Ruthie always understood how fortunate her family was to escape the brutality both and she never forgot those who were left behind.

She graduated from Central High School in 1946, attended the University of Missouri for one year, and then went to work for George K. Baum. Shortly thereafter, she met and married attorney Herbert Mayer Krigel, with whom she had three children.

Widowed in 1974, Ruthie went to work for J.C. Nichols, where she set records in sales. In 1978, Ruthie found love again and married renowned jeweler Harold Tivol. She joined him at work, where her style and charm enhanced the business, and the charismatic couple became some of the most respected retail leaders in the industry.

Rarely seen without her signature South Sea pearls, Ruthie Tivol was among the first to recognize the talent of new designers and young entrepreneurs in the industry and an immediate champion of the then-nascent designer jewelry movement.

On a personal note, I chatted with Ruthie pretty much every major trade show, both here and abroad. Like so many of the great industry leaders of her generation, she was willing to take time to talk to me even when I was starting out at JCK. As my career advanced and I became editor-in-chief of JCK, our talks continued, and we shared a number of laughs. I remember one conversation where, as two Jewish women, we joked about having “Jewish hips” and how it wasn’t always easy to find clothes that fit us well. She admired the Thai silk dress I had on, asked where I got it, and when I told her I’d made it, she joked that I’d picked the wrong part of the fashion business to be in. I laughingly told her how I’d ended up transitioning from a fashion design major to an English major—a professor who bluntly but kindly pointed out that my writing talent was a hell of a lot better than my drawing talent.

At home, Ruthie was president of the PTA at Border Star School. She served as president of the Women's Auxiliary at Menorah Medical Center. For many years, she was a docent at the Nelson-Atkins Museum of Art. She chaired numerous fundraisers for organizations throughout the community, including the Barstow School, the Anne Frank Exhibit at Union Station, the U.S. Holocaust Museum, and the Hyman Brand Hebrew Academy. She and Harold were also honored by Jewish Family Services.

Throughout her adult life, Ruthie also volunteered for the Jewish Federation of Greater Kansas City. She belonged to the New Reform Temple, The Temple, Congregation B'nai Jehudah, Oakwood Country Club, and Tamarisk Country Club. She enjoyed golf, tennis, and, especially, bridge. She was part of a study group comprised of remarkable women who gathered regularly for more than 50 years.

A Zoom memorial service will be held on Sunday, March 21 at 11AM CST please email zoom1@louismemorial.com for more information. The family requests no flowers. Donations may be sent to the Ruth Krigel Tivol Fund at the Jewish Community Foundation, 5801 W. 115th St., Overland Park, Kansas 66211, or the charity of the donor's choice. To leave an online condolence message, see www.louismemorialchapel.com.