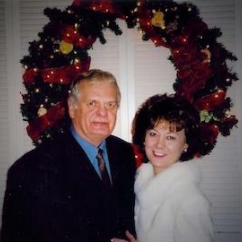 Born May 3, 1942 in Spangler, PA, he began his jewelry career at age 16 when he and his brother, Richard, worked in their parents’ jewelry store in nearby Ebensburg, PA. He also worked at his uncle’s car dealership, which ignited a lifelong passion for collecting cars as well as working with jewelry.

A graduate of Lamar College, Beaumont, TX, Wojcik earned a degree in finance and marketing. While in college, he worked at Gordon’s Jewelers in Beaumont but after graduation, left jewelry for a time to work at the Texaco oil refinery.

Skilled at the repair bench, Wojcik returned to jewelry in 1978, opening the first of three Nederland Jewelers stores and bringing his parents to work alongside him. In 1990 he married his wife, Gladys (shown with Wojcik, left), and in 1999 the couple began expanding the business, first moving to a new, bigger store in Nederland, and later opening stores in Beaumont in 2003 and Lake Charles, LA in 2006.

Preceded in death by his parents, Wojcik is survived by his wife, Gladys; brother Richard (Margaret); mother-in-law Florence Mitchell and brother-in-law Steve Mitchell (Cathy) of Lake Charles, LA; and various nieces and nephews.