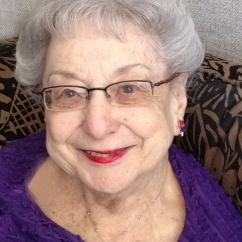 New York, NY—Perle Suna, former president of Suna Bros., died at her home January 20. She was 95.

Her tenure in the jewelry industry began by happenstance in 1972. She stepped in when the office manager of Suna Bros. suddenly resigned. While interviewing candidates, she realized—after only three days—that she was the best suited for the position. For the next 38 years, she would be a driving force behind Suna Bros, working alongside her husband, Kenneth, until his death in 1975 and later with sons Aron and Jonathan until her retirement in 2009, at age 88.

Perle Suna’s business acumen and formidable intelligence shepherded Suna Bros. through almost four decades. A member of the American Gem Society, Suna was a Certified Gemologist and Registered Supplier who attended many Conclaves. She hosted a biannual industry party which, as respected and loved by her colleagues in the industry as she was, garnered the greatest attendance so colleagues could be regaled by her.

Though Suna had the opportunity to be one of the founding members of the Women’s Jewelry Association, she declined because she didn’t believe in the exclusivity of men and women. Instead, she championed combined equality. Forward-thinking and liberal in her politics, Perle Suna was progressive before the word came back into vogue.

A fiercely independent woman with an insatiable appetite for knowledge, Suna graduated from Brooklyn College with a degree in English, and later earned a master’s degree in education from Adelphi Universidy. She disarmed everyone with her quick wit, strongly held opinions, and acute grasp of situations, according to family members.

She and Kenneth Suna married during WWII while he was stationed at an Army Air Force base in Florida and eventually returned to New York and settled in Freeport, Long Island, where their children Aron, Lila and Jonathan were raised. She years in Freeport championing the causes of the disadvantaged, and highly prized the work of the Anti-Defamation League and B'nai B'rith, where she served as president of her local chapter.

Suna was a prodigious reader whose lifelong book-a-day habit resulted in her finishing a remarkable 32,120 titles in her life. Her other passions were Tudor history, opera, bridge, films and mysteries. As a lifelong progressive Democrat, she remained engaged in world events and was delighted by technological advances.

Suna was predeceased by her parents, Lillian and Hyman Wurtzel, and her husband, Kenneth Suna. She is survived by her children Jonathan, Lila, and Aron (Marjorie); siblings Lolly (Shel), Elaine (Martin), Leo (Pat); and grandchildren Kenneth, Claire, Natalie, Carolyn, Phillip, and Lauren.

Contributions in her memory may be made to Mt. Sinai Visiting Doctors Program or the Anti-Defamation League. Read more here.