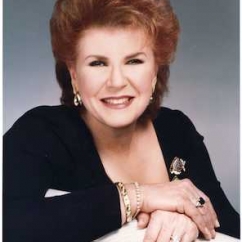 Helene Fortunoff’s jewelry career began when she entered Alan’s family housewares business, started in Brooklyn, NY in 1922 by Max and Clara Fortunoff. Helene proved herself a trailblazing jewelry merchant who established the fine jewelry division of Fortunoff in 1957. She took a few showcases and grew them into a multi-million-dollar jewelry business with stores in Westbury and White Plains, NY; Paramus, Wayne and Woodbridge, NJ; and its famous crown jewel on Fifth Avenue in New York City. She retired in 2005 after the sale of the company.

Long respected as a leader in the merchandising and design of fine jewelry, Fortunoff developed a homegrown team of jewelry merchants who traveled the world to find new and unique products. Her taste and talent for merchandising enabled the company to become a nationally recognized leader well beyond its geographic footprint. With just five locations, the company was recognized by National Jeweler in 2003 as the 24th largest jewelry retailer in the United States.

Fortunoff’s successful career also shattered the glass ceiling for women and upended the traditional dominance of men in the jewelry industry. The first recipient of the National Jeweler Award for retailing excellence, she also received the same honor from the Women’s Jewelry Association (WJA) Hall of Fame in 1993, and served multiple terms on the WJA board of directors and two terms as its national president. She also served on the board of the Fashion Group International for more than 15 years and was the 2001 recipient of the American Gem Society’s 2001 Triple Zero Award.

Fortunoff also was recognized around the world for her achievements. She was the first woman member of the United States Carat Club, a private and prestigious group organized by De Beers. In recognition of her long association with Italian jewelry manufacturers, Fortunoff received the honorary appointment as Knight of the Order of Merit of the Republic of Italy in June of 1997. Her interest in gem and industry standards lead to her election to chairman of the Board of Governors of GIA (Gemological Institute of America) and, in January 2006, she received the Gem Award for lifetime achievement from the Jewelry Information Center, presented by Lauren Bacall, a longtime spokesperson for the Fortunoff brand.

Helene Fortunoff also was a major philanthropist who always reserved time for community and religious organizations. A past trustee of the North Shore Family and Child Guidance Association, she was honored as their 1996 Woman of Achievement. She is a past chairman of the Board of Trustees of Hofstra University. She was honored by the UJA Federation of New York’s Diamond and Jewelry Division, as well as this same division by ORT. She was a charter member of the UJA Women of Distinction and a Lion of Judah of that organization. In addition, she served as an advisory board member of the Women President Organization.

She most recently supported The Fortunoff Video Archive for Holocaust Testimonies at Yale University, which records, preserves, and provides access to testimonies of survivors, witnesses, bystanders and liberators of the Holocaust, The Lustgarten Foundation, and Mount Sinai Medical Center Foundation.

On a personal note, when I entered the industry in 1986 as a junior editor at JCK magazine, Helene Fortunoff was already an industry leader, and figured prominently in at least one article in almost every issue of the magazine. She was one of the first people asked to be on the advisory board for the new JCK Show in 1992.

Like all of our industry’s greatest leaders, Fortunoff graciously took time to chat with even the most junior of editors. Later, as I advanced in my career and was appointed to the national board of WJA, I got to know Helene as a person as well as a legend. She was down to earth, always willing to offer advice, and she and I appreciated each other’s way of speaking bluntly.

Helene got a great laugh from my story of how, after getting up before dawn to drive from Philadelphia to a family Bat Mitzvah on Long Island, I was planning to go take a nap when my mom got in my car and said “Fortunoff’s” in the tone of voice that meant don’t argue. She vanished into the doors of the Westbury store for a good two hours. I don’t know whether my mom was more impressed that I knew Helene Fortunoff or that I had met Elizabeth Taylor.

After being introduced by a mutual friend in 2001, Helene married Robert Grossman in 2006. In addition to Robert, she is survived by five children: Esther, Andrea, Rhonda, Ruth, and David. She was predeceased by a son, Louis, who passed away in 2012, and a brother, Leon Finke. She is also survived by nine grandchildren and one great-grand-child.

Services will be held in Long Island this Wednesday. Memorial donations may be made to the Fortunoff Video Archive for Holocaust Testimonies at Yale University, The North Shore Child and Family Guidance Center, or The Lustgarten Foundation for Pancreatic Cancer Research.

Previous article:
Are You Prepared for Possible Tax Law Changes Next Year?

Next article:
VIBHOR Is Helping To Change Lives One Limb At A Time.