Naples, FL—Robert Wander, left, a fine jewelry designer renowned for his work with colored gemstones, died September 12 at his home after battling lung cancer. He was 76; he would have turned 77 three days later.

Wander was born into a jewelry family who owned salons in New York City and Paris, as well as jewelry concessions in fine department stores though out the American southwest. After serving as president of his family firm for a time, he set out on his own and began producing his own designs under the name Winc Inc.

Wander is remembered by fellow designers as a pioneer in jewelry creation who sold his work through some of America's finest jewelry galleries and department stores for over 40 years. He was among the first designers to travel to Hong Kong in the mid-1980's to find ways to produce fine jewelry at a very high level of craftsmanship, while making it available to a much broader audience. Along the way he helped found a jewelry production house, DWL, in Hong Kong, which would rise to global renown owing much to Wander’s challenging designs. 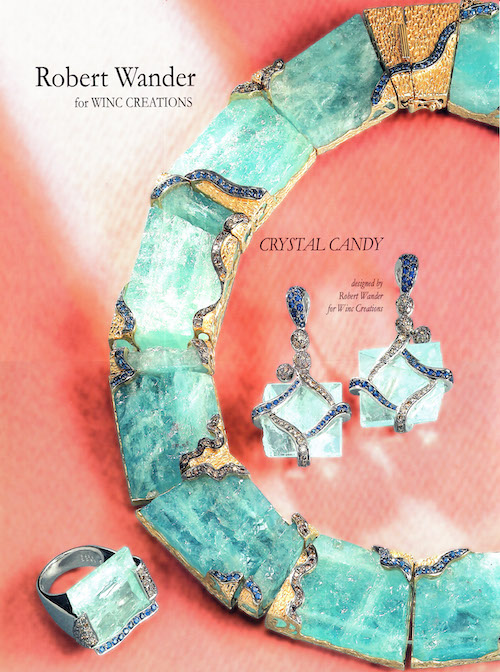 He would create lifelike lizards covered in hundreds of tsavorites and sapphires in place of scales, perched on top of fiery red coral sticks. All of this was backed by his mythical story of the Stick Lizard, who traveled the hottest deserts in America carrying a stick, so at the hottest point of mid-day he could anchor the stick in the sand and climb atop it to avoid the worst heat. Wander pioneered the use of single cut, fractured, yet beautifully colored, tourmalines, aquamarines and so many other gems, which had been mostly ignored, into jewelry that had both humor and a sense of ancient royalty. 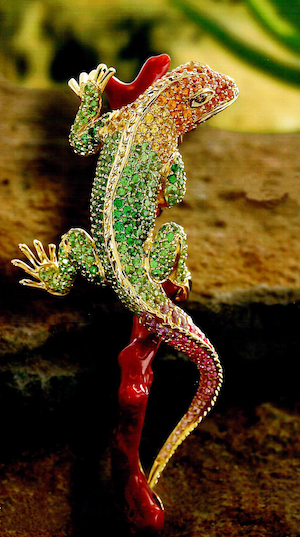 One of Wander's mythical Stick Lizards.

Wander’s good friend and fellow jewelry designer Michael Sugarman said, “Any jewelry artist will tell how hard it is to keep their work fresh, while still connecting to an evolving audience. Robert Wander managed to keep re-inventing himself over four decades, while always seeming to produce ever more intricate, audacious works.”

“We will greatly miss Robert and his larger-than-life, humorous nature,” said Centurion president Howard Hauben. “He was one of the first designers to join Centurion and helped shape the show we have become over the past 19 years.”

In time, Wander married Deanna Haimoff, a talented jewelry designer in her own right who owned a jewelry gallery in Hawaii. The couple lived there for a long time until they retired to Florida.

On a personal note, I have many fond memories of Wander dating back to my earliest days as a budding fashion editor at JCK magazine in the early 1990s. He was always willing to take time to patiently explain how his jewelry was created, or explain what the different gemstones were, how they were cut, and where they came from, as I was learning my way in the field. Later, we just spent time at every jewelry show—including Centurion—laughing and chatting about life in general. Deanna, meanwhile, always wore beautiful Thai silks in colors that complemented Robert’s jewelry. I admired them, as I had studied fashion design for a time in college. One show, he and Deanna surprised me with a beautiful Thai silk shirt of my own, in a vivid teal color, which I wore frequently for many years.

Huge dinners with industry friends were de rigueur while Wander was still exhibiting at tradeshows.

In addition to Deanna, Wander is survived by his stepchildren Mamon Haimoff, Dana Haimoff, and their children.