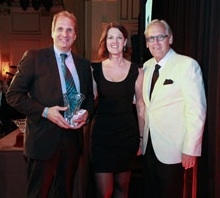 New York, NY—Centurion’s own Howard Hauben was one of the honorees at the American Gem Society’s 12th annual Circle of Distinction dinner and awards, held July 30 at the historic Plaza Hotel in New York City.

“Through their work and efforts, the contributions tonight’s recipients have made to the industry have left an indelible mark that will endure for years to come,” said Ruth Batson, CEO of the American Gem Society and AGS Laboratories. This year’s event broke attendance records, she said; AGS sold out of tickets to the dinner. “It is really a testimony to tonight’s honorees.”

“When friends in my Bronx neighborhood wanted to acknowledge each other, we did it with numbers,” joked Hauben. “Bo Derek was a 10. And ‘Hauben? You’re a real zero!’ So AGS gets it!" Turning serious, he added, "It’s a tremendous honor and privilege to share the stage this evening with the Brombergs and Beryl Raff.”

JCK sponsored the evening’s awards, while Julius Klein sponsored the cocktail reception in the Terrace Room prior to the dinner. The American Gem Society Laboratories treated each of the guests to its proprietary Angular Spectrum Evaluation Tool, commonly known as the handheld ASET.

New York, NY—Ingrid Lederhaas-Okun, a former vice president of product development for Tiffany & Co. has pled guilty to stealing $2.1 million worth of jewelry from her former employer.

Lederhaas-Okun was arrested earlier in July, according to this article in Forbes. She pled guilty to interstate transportation of stolen property, which carries a maximum sentence of 10 years in prison. But in a plea agreement a charge of wire fraud—which carries a maximum penalty of 20 years in prison—was dropped. She also has agreed to make restitution in the amount of $2.2 million.

Because of the various responsibilities of her job, Lederhaas-Okun was able to remove the jewelry—which she, her husband, and a friend then sold through an international jewelry buyer and reseller in Manhattan—with minimal, if any, supervision.

A Tiffany employee at the flagship store, who asked to remain anonymous, said the theft and subsequent arrest of Lederhaas-Okun was a surprise to associates on the sales floor.

New York, NY—JCK Events held its third annual Luxury Privé New York show last week at the Pierre Hotel. The event featured a host of luxury and new designer brands, and introduced trade and consumer media to the collections prior to the fall selling season.

First-time attendees Karen Goracke and Amy Dudzik of Borsheims, Omaha, NE, remarked on the show’s low-key vibe, and caught up with at least one designer—Ed Levin—whom they didn’t have time to see at the JCK show in Las Vegas.

From the brand side, exhibitors such as Jack O'Neil of Spark Creations observed that retailers had confidence in the economy and were buying more color, while Ray Mastoloni of Mastoloni Pearls said retailers were able to finish up business that was started in Las Vegas.