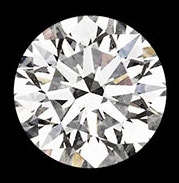 Carlsbad, CA—A disturbing turn in the battle against undisclosed synthetic diamonds was thwarted recently by both an observant jeweler and the Gemological Institute of America. Gems & Gemology, GIA’s scholarly journal, reported that a 1.76-carat synthetic diamond (left, image GIA) was fraudulently inscribed with the GIA report number that went to a different—and natural—diamond.

Advances in technology have led to a noticeable increase in undisclosed synthetic diamonds being slipped into the supply chain. While gemological laboratories are able to identify synthetic stones from natural with ease, jewelers must be especially vigilant to ensure they’re not inadvertently passing along a manmade stone as natural.

Recently, a jeweler submitted a 1.76-carat round brilliant stone for a updated diamond grading report. Its girdle was inscribed with an actual GIA report number issued in 2015, says G&G, but the original report didn’t match the new stone. The old report described a 1.74-carat natural, untreated D VVS1 diamond with an Excellent cut grade. But upon grading the new stone was described as slightly larger (1.76 to 1.74 carats), and not as fine in color or clarity (F, VS1). Moreover, GIA’s screening process flagged the stone for additional testing to determine its origin, which proved to be HPHT-grown. Upon closer examination, the font used to inscribe the report number proved different from GIA’s normal style, proving the inscription was fraudulent.

The inscription, for a different diamond report, was discovered to be fraudulent. Image: GIA

The article states that most synthetics GIA encounters are properly disclosed, and while some stones are submitted because of jeweler concerns, this kind of blatant fraud is still extremely rare. In this case, the submitting client noticed inconsistencies with the GIA report information and submitted it for an updated report. GIA advises the industry to be highly vigilant and if there is even the slightest doubt about a stone, submit it to a gemological laboratory for verification.

Separately, GIA’s Retailer Lookup Service recently celebrated a milestone increase to 7,500 retailers, and a 300% increase in consumer traffic in 2017. The service provides a search engine for shoppers looking for GIA graded diamonds, and stores with GIA educated staff. Consumers search for those retailers by city or postal code, and the service returns addresses, business hours, and directions to registered stores.

7,500 doors are now registered on the site, which in 2017 alone posted more than a 300% increase in the number of consumers using it, says Tali Nay, manager of GIA’s Retailer Support Program. Registered retailers have increased 60% over the past two years, with 42% of the participating stores outside of the United States.

To register for the Retailer Lookup click here. Consumer URL for the lookup service is here. For more information about the Retailer Support Program click here or email retailersupport@gia.edu.

Marie Osmond, world-famous entertainer and entrepreneur, will open Conclave on Monday, April 23. Jon Dorenbos, famed magician, professional football player, and one of the most sought-after speakers today, will be the breakfast keynote on Tuesday, April 24. On Wednesday, April 25, Mike Rayburn, world-class guitarist, will strike a chord in Music City as that day’s keynote speaker. Returning as emcee and featured speaker will be Joel Zeff, back for his third straight Conclave.

“We are so excited about this lineup, and there is more great news to follow in the upcoming weeks,” said Katherine Bodoh, RJ, CEO of the American Gem Society and AGS Laboratories. “Conclave is known for its talented lineup of sought-after speakers and this year is no exception.”

To learn more about Conclave, contact Conclave@ags.org. For more information about the American Gem Society and to visit the new website, please visit AmericanGemSociety.org.

Geneva, Switzerland—Yianni Melas, a renowned trader who has worked for some of the top global diamond and gemstone brands, staged a weeklong hunger strike outside of Christie’s auction house in Geneva leading up to the auction, National Jeweler reports. Melas began the strike to call attention to the investors of Swiss jewelry brand De Grisogono.

According to NJ’s report, Melas believes the brand is at least partly owned by Isabel dos Santos, daughter of former long-time Angolan president Jose Eduardo dos Santos. Melas wants his efforts to call attention to the gaping chasm of wealth inequality in Angola—Forbes estimates Isabel dos Santos’s net worth at $3.4 billion—and the extreme poverty of most Angolans, who have among the lowest life-expectancy rates in the world. Melas called for profits from the stone to be used to build a children's hospital in Angola.

“The Art of De Grisogono, Creation 1” emerald and diamond necklace went on the auction block November 14, as part of during Christie’s Geneva Magnificent Gems sale. It fetched US $33,705,995 (CHF 33,500,000), approximately $206,000 per carat, but the final price was a disappointment to some experts. The necklace’s 163.41-carat center—recovered from Angola’s Lulo mine in February 2016—was the largest D-flawless diamond ever auctioned, according to Christie’s. 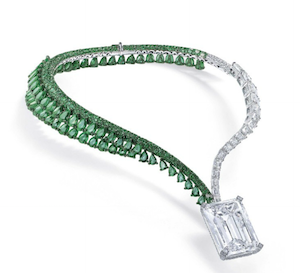 Gaborone, Botswana—De Beers Group and United Nations (UN) Women, in collaboration with Botswana’s Ministry of Nationality, Immigration and Gender Affairs, this week announced a BWP8 million, three-year investment in capacity-building programs to support women micro-entrepreneurs in select villages in the country’s Okavango Delta and Kweneng District. The Okavango Delta and Kweneng District are some of the poorest and most remote areas of Botswana and were selected as the initial focus due to the strong potential to deliver tangible, positive outcomes that support entire communities through the increased economic empowerment of women micro-entrepreneurs.

In the Okavango Delta, De Beers and UN Women will work with the NGO Adore Little Children Botswana (ALCB), which provides support to women and children in Ngarange Village. The partnership will extend ALCB’s existing women’s economic empowerment programs, which focus on improving livelihoods through permaculture to produce fresh vegetables for local communities.

In Kweneng District villages, De Beers and UN Women will work with local partners to advance existing micro-enterprises that include leatherworks, pottery, and livestock businesses, as well as identifying and developing opportunities for new small, medium and micro-enterprises.

The programs, to be launched in early 2018, will equip women micro-entrepreneurs in the target regions with business management skills, an understanding of access to markets and marketing, and technical skills, especially in agricultural activities. In addition, the programs will help build life skills and confidence to support effective decision-making, communication and negotiation.

De Beers Group CEO Bruce Cleaver said, “Botswana has achieved a huge amount of development through prudent use of diamond revenues, but challenges remain and programs such as these can have a real and lasting positive impact. Advancing women’s economic empowerment in two of the most disadvantaged areas of Botswana will not only support the women micro-entrepreneurs that participate in the programs, but also their communities through increased employment opportunities and skills development.”

The programmes are part of De Beers’ three-year global partnership with UN Women and its commitment to stand with women around the world. De Beers is investing US$3 million to advance women micro-entrepreneurs and STEM students in its diamond producing countries of Canada, Botswana, Namibia and South Africa.

Next article:
The Question Every Business Owner Needs to Ask