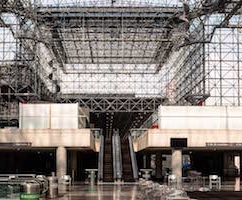 Related: U.S. Jewelry Shows Will Go On, But How Will The Coronavirus Impact Retailers?

GIA was the first to pull the plug, last week, followed by MJSA on Monday and JA on Tuesday morning.

Nellie Barnett, GIA manager of public and media relations, issued the following statement: “Due to evolving concerns about the coronavirus, we cancelled the March 13 GIA Jewelry Career Fair in New York. We believe this is in the best interest of all participants’ health and safety. We will look for a future date to reschedule the event. People interested in starting or advancing their career in the gem and jewelry industry can continue to connect with employers on the GIA Gem & Jewelry Career Center: https://www.gia.edu/jewelry-gem-jobs.”

MJSA announced Monday that its Expo, scheduled to run March 15-17 at the Jacob Javits Convention Center, is being postponed.

"We place the highest importance on the health and well-being of our exhibitors, attendees, and staff," said MJSA president/CEO David W. Cochran. "Given Governor Cuomo's decision to declare a state of emergency for New York State, along with the current uncertainty about the virus's progression in New York City, we've decided to postpone the show until the threat passes and we can be more certain that MJSA Expo can be run both safely and successfully.

"We've already heard from many Expo exhibitors who agree that this move is necessary," he continued. "We are currently working with the management of JA New York and the Javits Center to identify new show dates for later this year, and we'll coordinate with our exhibitors to ensure the shift can proceed as smoothly as possible."

More information and new dates will be announced soon. For continuing updates, go to MJSAExpo.org.

JA, meanwhile, has canceled the spring event altogether and exhibitors’ money will be refunded. A statement from the organization cited the state of emergency declared by New York governor Andrew Cuomo and read in part, “The health and safety of each and every member of our community and our staff is of the utmost importance to us. After careful consideration, and speaking at length with members of our community, we have made the difficult decision to cancel our Spring JA New York Show, March 15-17.”

Show director Drew Lawsky, in an email to vendors, said, “We will be processing refunds for all previously paid booth and sponsorship fees in due course.” The next JA New York show will be its regularly scheduled summer show, set for Aug. 9-12 at the Javits Center, and its fall event will be held October 25-27 at the Javits Center.

At press time, later events including AGS Conclave in Denver (April 27-29) and the Las Vegas jewelry shows, were still going ahead as planned. A Facebook posting from AGS CEO Katherine Bodoh read in part, "Conclave is currently scheduled as planned. In recent days, we’ve received communications asking about the event, and as you may have heard, this morning, Colorado declared a state of emergency. I hear your concerns and want you to know that your health and safety are a top priority. We are currently evaluating the future status of Conclave in Denver. We are also working with the hotel, and officials to monitor the Coronavirus in the area. We will continue to issue updates."

New York, NY—Gold prices started the week at a seven-year high as global stock markets reeled from a one-two punch of oil price wars and spreading coronavirus. By Monday morning, gold futures had already hit $1,700 the ounce, reported Kitco. At press time on Wednesday, it had retreated to $1,663, 28% higher than it was one year ago at $1,292.

Americans collectively gasped as the Dow Jones plunged 2,000 points after opening on Monday, triggering a 15-minute “circuit breaker” trading stoppage at the New York Stock Exchange within the first few minutes of its opening bell.

The 15-minute circuit breaker program was enacted after the 1987 Black Monday crash when the market lost 20.5% of its value in one day. It allows traders to step back, calm down, and hopefully avert panic by making more informed decisions and prevent the market from crashing through the floor. Monday marked the first time the circuit breaker was triggered since December 2008, in the depths of the financial crisis. The breakers trip after a 7% drop (as on Monday morning); they trip again after a 13% drop, and the market would close for the day in the event of a 20% drop.

Further volatility was evident as the 10-year U.S. Treasury note saw its yield dive to a record low of 0.387% overnight—the first time ever below 0.5%--though it rebounded to 0.5% by Monday morning. On Monday, the yield curve for U.S. Treasury bonds went below 1% for the first time in history, indicating that investors are expecting the Fed to cut rates to zero in the coming months.

A report on CNBC says the oil price war is more worrisome to investors than the virus, although concerns about its economic impacts have investors spooked as well. All in all, investors are feeling highly risk-averse, says Kitco, which drives up safe-haven investments like gold.

Next article:
The Rarest Commodity Is Leadership Without Ego: Bob Davids at TEDxESCP | TEDx Talks Video