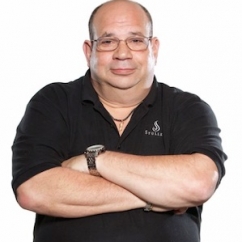 He began his jewelry industry career at Swest Inc., but was a longtime employee of Stuller Inc., in Lafayette. He was known throughout his 40 years in the industry as “The Tool Guy,” who established lifelong relationships with customers, who then became friends. Alison Gaudet Boatright, a Stuller colleague, said on Facebook that any time there was an event, attendees always wanted to meet two people: founder Matt Stuller and Andy The Tool Guy.

Stuller’s social media posts paid tribute to Kroungold as “one-of-a-kind, irreplaceable, and so much more.

“Andy’s infectious personality and joyous outlook on life put a smile on everyone’s face. He was beloved by our Stuller family and equally beloved by our customers. Fly high sweet angel.”

Kroungold is survived by his son and daughter-in-law, Robert J. and Hannah L. Kroungold of Dallas, TX; a sister and brother-in-law, Amy Mittelberg and Rickey Mittelberg; two nieces and a nephew, and two “grand-pups,” Auggie and Dash. Kroungold was preceded in death by his parents, Leon and Marion Silver Kroungold.

During standard testing procedure, the two-carat stone was exposed to high-powered ultraviolet rays, which turned the near colorless stone into blue. That alone isn’t unusual—CVD diamonds can change colors under high levels of UV light or extreme heat—but typically they return to their original color after about 30 to 60 minutes in direct sunlight. This stone, however, too more than two hours in normal ambient light to return to its normal color, and in the dark of the vault, still retained its blue color after a week.

In a release, GSI’s technicians stressed that most CVD diamonds don’t change to that extreme degree, but emphasized the importance of lighting conditions when color-grading them. CIO Nicholas De Re also warned that consumers might observe a color change when wearing them in intense lighting conditions such as a sunny day at the beach or under blacklight in a nightclub.

“It is strongly suggested that all laboratory-grown CVD diamonds are placed in a full-spectrum light box for at least 30 minutes before color grading,” he advised, explaining that the color change is due to electrons in defects in the diamond causing its energy state to change and impacting how color is absorbed on the visible spectrum.

GSI’s findings correlate with earlier research conducted at GIA, which described the process in a 2010 article in Gems & Gemology. Researchers there observed color changes on the brown spectrum in CVD-grown diamonds.

Paramus, NJ—PT NEXT, the technology arm of Pac Team Group, has acquired software development company, CodeNameWhat. Founded by RFID software veteran Peter Shoemaker, CodeNameWhat worked with PT NEXT on the development of ARGOS, their RFID-based platform for the jewelry and timepiece industry. Shoemaker will continue advancing this platform in his new role as PT NEXT’s Director of Software Engineering.

An authority in technology innovation and IoT technology for the watch and jewelry industry, PT NEXT offers turnkey solutions designed to elevate the in-store customer experience.“With the acquisition of CodeNameWhat, PT NEXT can continue to lead the design, development and implementation of cutting-edge technology solutions that are specifically designed to address our customer’s retail challenges in the jewelry and timepiece industry,” said Eric Zuckerman, President of Pac Team Group. The company offers luxury brand displays, packaging, fixtures and exhibition solutions.