A Horribly Violent Week For Jewelers

New York, NY—Three horrific incidents of violence have been perpetrated against retail jewelers in the past week, reports the Jewelers Security Alliance.

Last week, the December 5 slaying of a UPS driver in Coral Gables, FL, during an attempted jewelry store robbery made national news. 27-year-old Frank Ordonez, left, who was filling in for an absent UPS colleague on a route he usually didn’t drive, was killed following the attempted heist at Regent Jewelers, on Coral Gables’ “Miracle Mile” of shops, art galleries, and restaurants.

Coral Gables police responded to a silent alarm when two suspects entered the jewelry store posing as postal workers, but by the time officers arrived the store’s proprietor had exchanged gunfire with the robbers.

A store employee, Liliana Sardi, 67, was injured in the shootout, after which the suspects fled in a U-Haul which they ditched about a mile away and hijacked a UPS delivery truck instead, kidnapping the driver in the process. A high-speed chase through both Dade and Broward counties ensued, ending in Miramar, FL, when police shot and killed the two suspects. Ordonez and a bystander also were killed in the incident; the two deaths were the first jewelry-related homicides this year. 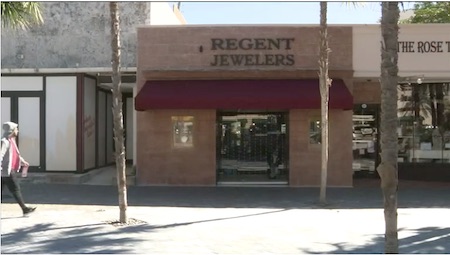 A botched robbery at Regent Jewelers resulted in the deaths of a UPS truck driver and a bystander, as well as the criminals.

Ordonez was identified as a father of two young daughters. The bystander, sitting in his car nearby, was identified in media reports as 70-year-old Richard Cutshaw. The two dead suspects were identified as Lamar Alexander and Ronnie Jerome Hill, both 41-year-old felons with lengthy criminal histories.

The incident has raised questions, however, and some of the officers involved have been placed on administrative leave pending an investigation into the gunfire exchange between the suspects and officers. Local television also aired a citizen video taken by a nearby driver. Click here to watch.

Meanwhile, on December 4, a jeweler in Costa Mesa, CA, was beaten, choked, kidnapped, and dumped, bleeding, about seven miles from his store. The jeweler, who was not identified for security reasons, left his store around 6:30 p.m. when he was accosted by two suspects in a nearby parking lot.

The jeweler, who was carrying both cash and merchandise, fought back furiously. The suspects choked him with a tie or other cord, taped his mouth with duct tape, tied his hands, beat him unconscious, and shoved him inside the trunk of his own car. They drove seven miles to a deserted parking lot and dumped him, where he was later found by a tow truck driver, still unconscious and covered in blood. He is in the hospital in serious condition.

The two suspects then returned to the store through a rear door and were caught on surveillance video from the store. One suspect is wearing a white hoodie and sunglasses; the other is bearded but left his face exposed. Police arrived at the store after the store’s alarm went off, but the suspects had fled. Watch a news report of the incident here. 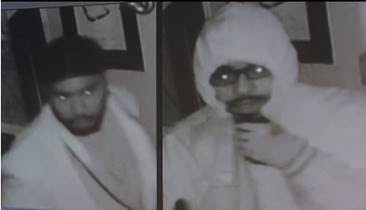 Surveillance images of the two thugs that tied up and choked a jeweler in Costa Mesa, CA, leaving him bleeding and unconscious in a parking lot.

Finally, a New York City jeweler was punched in the face by a suspect who entered the store with two other individuals and took several watches before fleeing.If you have information on this incident, please contact Detective Scott Gomez of the NYPD at (212) 767-8415. If you have information on the other two crimes, please contact JSA at (212) 687-0328 or jsa2@jewelerssecurity.org.

New York, NY—The Diamond Empowerment Fund announces that it will evolve its business name to Diamonds Do Good, seizing on the simplicity, significance, and resonance of the registered tagline it has been using for five years. In keeping with the change, the non-profit organization also has reimagined its logo and will be doing the same to its signature Las Vegas event held on the eve of the opening of the JCK Show. 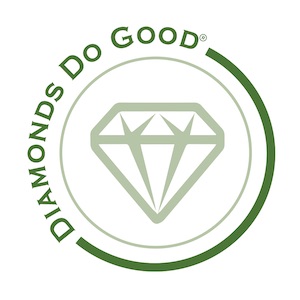 The new Diamonds Do Good logo more clearly represents the organization's dual mission to support programs that drive economic development in diamond communities around the world, and to communicate the resulting good that diamonds do.

Inspired by Nelson Mandela in 2007, the Diamond Empowerment Fund’s mission has supported programs that develop and empower people in diamond communities around the world. In recent years, its mission expanded to amplify and tell the stories of the good that natural diamonds do for people in the communities where they’re mined, cut, polished, and sold. Those stories have resonated with consumers and the trade alike: consumers have a better image of the natural diamond industry, and are more interested in purchasing a natural diamond after reading the ‘do good’ stories hosted on diamondsdogood.com.

Likewise, members of the industry now identify their own sustainability programs under the ‘do good’ banner and use #diamondsdogood in their social media outreach, further building on the message and ensuring that diamonds continue to be a source of sustained economic development around the world.

Having created and trademarked the Diamonds Do Good name in 2014, the organization will now identify itself under this moniker moving forward, and has rebranded itself with a fresh, new look to mark this evolution. It will be celebrated at DDG’s signature event June 1 in Las Vegas, as a reimagined evening and experience that draws the industry’s top global leaders.

Classic Blue Is Pantone 2020 Color Of The Year

New York, NY—Experts at the Pantone Color Institute have named Classic Blue (number 19-4052) as the 2020 Color Of The Year. 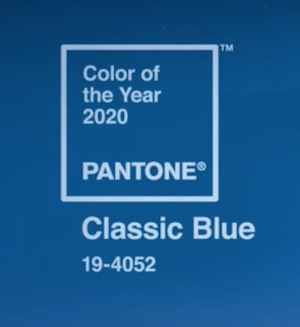 For over 20 years, Pantone’s Color of the Year has influenced product development and purchasing decisions in multiple industries, including fashion, home furnishings, and industrial design, as well as product packaging and graphic design. Each year, Pantone’s color experts comb the world analyzing a wide range of trends and color influences, ranging from the entertainment industry and films in production, traveling art collections and new artists, fashion, all areas of design, popular travel destinations, as well as new lifestyles, playstyles, and socio-economic conditions. Influences may also stem from new technologies, materials, textures, and effects that impact color, relevant social media platforms, and even upcoming sporting events that capture worldwide attention.

Instilling calm, confidence, and connection, this year’s selection of an enduring blue hue highlights our desire for a dependable and stable foundation, says the Institute. Elegant in its simplicity, suggestive of the sky at dusk, and imprinted in our psyches as a restful color, Classic Blue brings a sense of peace and tranquility to the human spirit. As technology continues to race ahead of the human ability to process it all, it is easy to understand why we gravitate to colors that are honest and offer the promise of protection. Non-aggressive and easily relatable, Classic Blue lends itself to relaxed interaction. Associated with the return of another day, this universal favorite is comfortably embraced and its reassuring qualities suggest a refuge and aid concentration in a reflective tone that fosters resilience.

Leatrice Eiseman, executive director of the Pantone Color Institute, says, “We are living in a time that requires trust and faith. It is this kind of constancy and confidence that is expressed by PANTONE 19-4052 Classic Blue, a solid and dependable blue hue we can always rely on. Imbued with a deep resonance, Classic Blue provides an anchoring foundation. A boundless blue evocative of the vast and infinite evening sky, Classic Blue encourages us to look beyond the obvious to expand our thinking; challenging us to think more deeply, increase our perspective, and open the flow of communication.”

US Ethical Gem Fair To Debut In Tucson

All participating gem suppliers emphasize a commitment to ethics in the gemstone supply chain, including supporting artisanal miners and communities, verifiable origins and traceability, commitment to environmental and health and safety regulations, and SCS-certified recycled diamonds and gemstones.

Related: The Rise and Rise Of The Ethical Jewelry Designer

Jewelry designers attending Tucson will be able to view and purchase gemstones and diamonds with the assurance of responsible sourcing and practices as these suppliers can provide specific details about the source of each gemstone to every customer.

Entry to the Historic Masonic Temple is from 33 E Ochoa Street, a five-minute walk from the Tucson Convention Center.

To register, click here and bring those credentials to the door.