London, UK—Platinum Guild International (PGI) has released the 2019 Platinum Jewellery Business Review (PJBR), revealing the aspiration for platinum among today’s consumers, with a particular focus on men’s jewellery, young consumers, and female self-purchase as the best targets to expand beyond bridal.

The annual Platinum Jewellery Business Review surveyed over 1,000 manufacturers and retailers, in addition to over 1,000 consumers,1 to provide the world’s most comprehensive and in-depth analysis of platinum jewelry’s performance in 2018, together with a forecast for 2019, highlighting the trends that will shape the industry in each of the four key platinum jewelry markets: Japan, China, USA, and India.

“This survey demonstrates how platinum continues to sit atop global consumers’ precious jewelry metal hierarchy as the metal of highest perceived value, making it the natural choice for jewelry that holds a special place and meaning in their lives. Three of platinum jewelry’s key markets experienced growth, and all four markets witnessed expanded platinum jewelry offerings beyond platinum’s stronghold in bridal,” says CEO Huw Daniel of Platinum Guild International.

Self-Purchase. Retailers in the United States report 11% growth for platinum jewellery in 2018, thanks to a strong economy, a favorable metal price, and continuous marketing initiatives that remind consumers that platinum is the most secure setting for their prized diamonds. Beyond the bridal sector, which remains a platinum stronghold, self-purchase is a key area for future growth around the world, most notably in the United States.

In just one year, PGI’s Platinum Born collection won the hearts of female consumers buying fine jewelry for themselves. The collection, which started with 12 SKUs, has grown to over 56 SKUs in 2019, and expanded distribution from America’s most exclusive independent retail stores to high-profile department store Saks Fifth Avenue, as well as online.

Top of page and below, "Debut" and "Reflection" earrings from the Platinum Born collection. 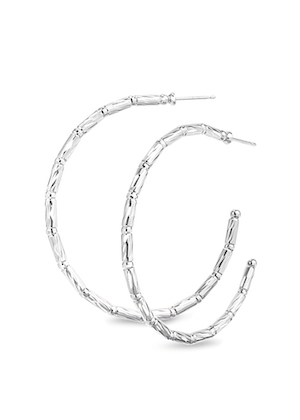 Young Consumers. Contrary to popular belief, the rising cohort of millennial consumers and the even younger generations are finding meaning in jewelry that embodies their aspirations and captures their memories. As the rarest of all precious metals, today’s consumers are turning to rare and timeless platinum, but their choices are being expanded into multiple jewellery categories unlike any other time in history.

Despite industry disruptions from government legislation and liquidity issues, India remains the fastest-growing platinum jewellery market with a significant 19% year-on-year increase in partner retail sales. PGI works with the jewellery industry to introduce new branded collections that open up consumer markets in one of the most rapidly changing and youthful markets.

Platinum jewelry sales by weight in China experienced a 5th consecutive year of decline in response to changes in the macro economy and retail consumption. Despite overall weak sentiment, many leading retailers revamped their platinum offerings with new and innovative designs, incorporating alternative materials, modular interactive parts, and re-imagined traditional Chinese motifs. These new collections are driving growth in the number of units sold among PGI’s partners, and are re-positioning platinum to be as competitive in both turn and revenue as the highest performing categories in store.

The global jewelry industry’s embrace of platinum as an incremental opportunity that attracts a younger consumer to their stores while delivering higher revenue per piece has resulted in significant distribution gains in 2018 that continue into 2019.

1. Source: Nielsen Precious Metals Consumer Study, May 2019; respondents aged 18-65 years old, across 15 cities in China, India, Japan and the US.

Certification will involve a comprehensive assessment of the lab grown diamond production process, compliance auditing, diamond testing, and traceability, and will result in the issuance of SCS Sustainably Grown Diamond certification mark. This consumer-focused mark will be geared toward point-of-sale messaging and advertising.

“As an industry, we recognize the high interest from consumers to be provided with valid, third-party verification of the sustainability and origin of products they buy,” said Chris Casey, LGDC president. “An important early initiative as an organization was to retain SCS to drive transparent reporting on the sustainability of the lab grown diamond market.”

Like other sustainability standards in the marketplace, the new standard will address environmental stewardship, social responsibility, and economic viability. Notably, it will also establish a cutting-edge climate neutrality benchmark goal for participating companies.

“As consumers increasingly choose lab grown diamonds, they want to be sure that their choices match their values,” said Stanley Mathuram, SCS vice president. “Certification to the Sustainably Grown Diamond standard will provide the scientifically robust reassurance that consumers are looking for, demonstrating company performance in meeting rigorous environmental and social requirements.”

The development of the standard will involve input from a variety of stakeholders, and will ensure compliance with all governmental regulations, from both technical and communication perspectives. Formal rollout of the standard is expected by the beginning of 2020, at which time producers will be eligible to apply.

“Lab grown diamonds are uniquely positioned in the diamond and jewelry market to carry a sustainability standard,” added Casey. “This standard will clearly set the benchmark for transparent reporting.” Once certified, individual companies will be able to use the Sustainably Grown Diamond label in communications to both the trade and consumer markets.

“The Lab Grown Diamond Council has been created to bring programs such as the SCS Sustainability Grown Diamond Standard to the market,” said Michael Barlerin, LGDC chairman. “Our mission is to create increased market clarity about the benefits of lab grown diamonds. This is a giant step in that process.”

“This is a great tool for our clients as the 360-degree view makes it easier for them to sell their gemstones,” said Kennedy Ho, chairman of AIGS.

The AIGS Lab, which is based in the Jewelry Trade Center in Bangkok, offers a comprehensive range of gemstone and jewelry analysis reports, including rubies, sapphires and emeralds. AIGS belongs to The Gem Alliance, an informal grouping of gem identification labs, launched by Kennedy Ho, which encourages sharing of research and information.